Since the nuclear crisis at Fukushima, the Cs decontamination works have yielded a large amount of contaminated soil. The urgency of reducing the volume of contaminated soil has become a serious concern with respect to the acceleration of ongoing work. The contaminated soil is reduced in volume through water treatment, using water circulation equipment specially designed. The fundamental principle of volume reduction is that radioactive Cs dissolved in water tends to strongly adsorb onto the surface of two-dimensional (2D) nanosheets, a basic structural unit of clay minerals.

Smaller particles of contaminated soil exhibit higher specific surface area for Cs adsorption in aqueous solution, enabling them to associate with a larger amount of radioactive Cs. The circulation of a lump of contaminated soil in aqueous solution is thus able to separate the fractions that contain high doses of radioactive Cs, which accumulated around the fine soil particles accompanying the clay minerals.

To aid the ongoing decontamination work, the adsorption of Cs in aqueous solution across a wide Cs molarity range is studied for the case of saponite clay as adsorbent, an inorganic layered material that is an abundant mineral in the soil environment. The local structure built by two-nanosheet insertion in clay is schematically shown in Figure 1 (see (I)). This local molecular structure contains three kinds of Cs adsorption sites: (a) nanosheet surfaces, (b) nanosheet edges, and (c) wedge-shaped parts. Cs ions are physisorbed at the nanosheet surfaces, which are negatively charged because of local compositional and structural fluctuations. Heavily adhesive Cs adsorption, so-called specific Cs adsorption, occurs both at the nanosheet edges and wedge-shaped parts. 2D nanosheets are also able to form other local molecular structures where both sides are hexagonal cavities and one side is a hexagonal cavity (see (II) and (III)). In these local molecular structures, Cs physisorption occurs at (d) oncoming hexagonal cavities and (e) hexagonal cavities. Furthermore, a step structure can be formed by the 2D nanosheets, which exhibit the nanosheet edge sites (see (IV)). 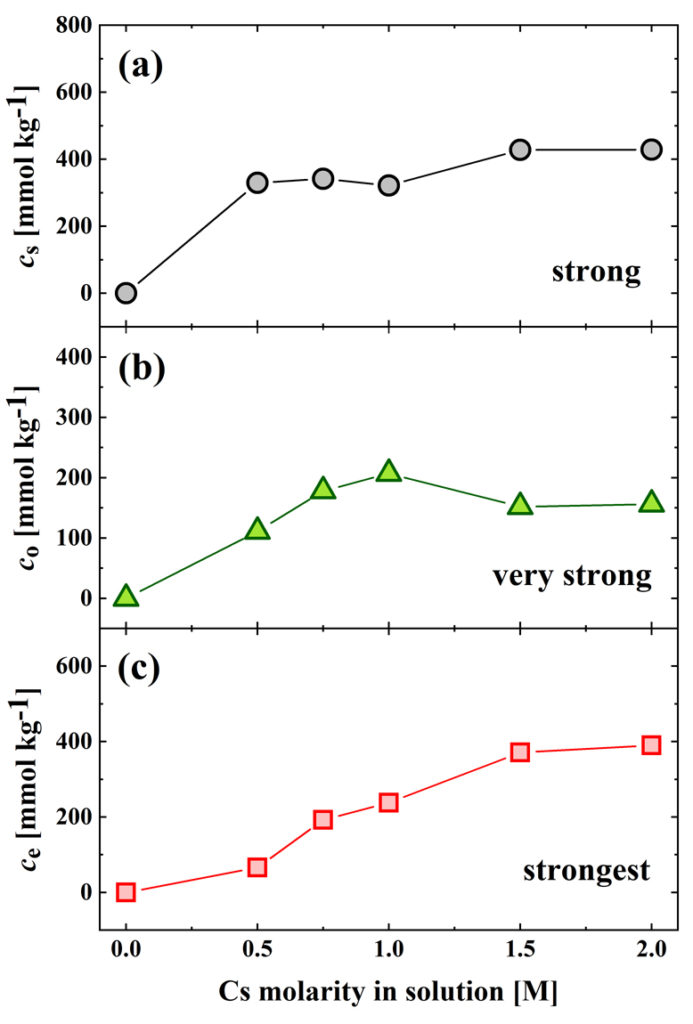 Fig. 2. Concentrations of nanosheet surfaces, cs (gray circles), oncoming hexagonal cavities, co (green triangles), and nanosheet edges, ce (red squares), as a function of the Cs molarity in the solution. The adhesivities at the nanosheet surfaces, oncoming hexagonal cavities, and nanosheet edges are described in (a), (b), and (c), respectively. The wedge-shaped parts could have the adhesivity “very strong”.