Invasive species are the organisms that cause significant economic or ecological damage in their non-native environment. Invasive species are considered the second biggest threat to global biodiversity after habitat degradation. These species threaten the stability and functioning of established ecosystems by affecting nutrient cycles and net primary productivity, affecting soil health by increasing soil acidity, posing a risk for pollinators, inhibiting regeneration of native species, and competing with native flora. Biological invasion causes significant economic losses to crop and livestock farmers around the world.

Once an invasive species is established in an area, one of the most cost-effective ways to reduce its threat is to identify areas vulnerable to invasion in the future and take pre-emptive measures to prevent further expansion. In this context, species distribution models (SDMs) are becoming increasingly important to predict spatial patterns of biological invasions, identification of hotspots for early detection and informing management of invasive species. SDMs relate the presence/absence records of species to the relevant environmental variables and subsequently project the modelled relationships across geographical space using gridded layers of environmental data, producing a map indicating areas of potential species distribution.

One of the critical features of gridded data is the ‘grain size’ – a term describing the geographical representation of the map layers. Grain size or spatial resolution of environmental variables strongly affect the interpretation of biogeographic characteristics of the modelled species. Use of smaller or finer grain size allows for a more accurate representation of the effect of local environmental conditions and biotic interactions in model prediction. It can be compared to the pixel density of a smartphone; smaller the size of individual pixels, higher the number of pixels per unit area of the screen and brighter (more detailed) a photograph appears on the screen.

Although it is widely believed finer grain size is almost always better to map species distribution, we argue that the accuracy of SDMs depend on determining the optimum grain size. In this study, we mapped the current distribution of an invasive species, Rhododendron ponticum in Wales, U.K. We used MAXENT, a maximum-entropy based machine learning algorithm for this analysis. MAXENT predicts the distribution of a species on the basis of a given set of predictor variables and presence records of the species. The model was trained in the Snowdonia National Park at three grain sizes (1 km, 300 m and 50 m). The model was projected to Brecon Beacons National Park. We assessed the accuracy of model transferability and found that the greatest model accuracy was achieved using 300 m grain size. 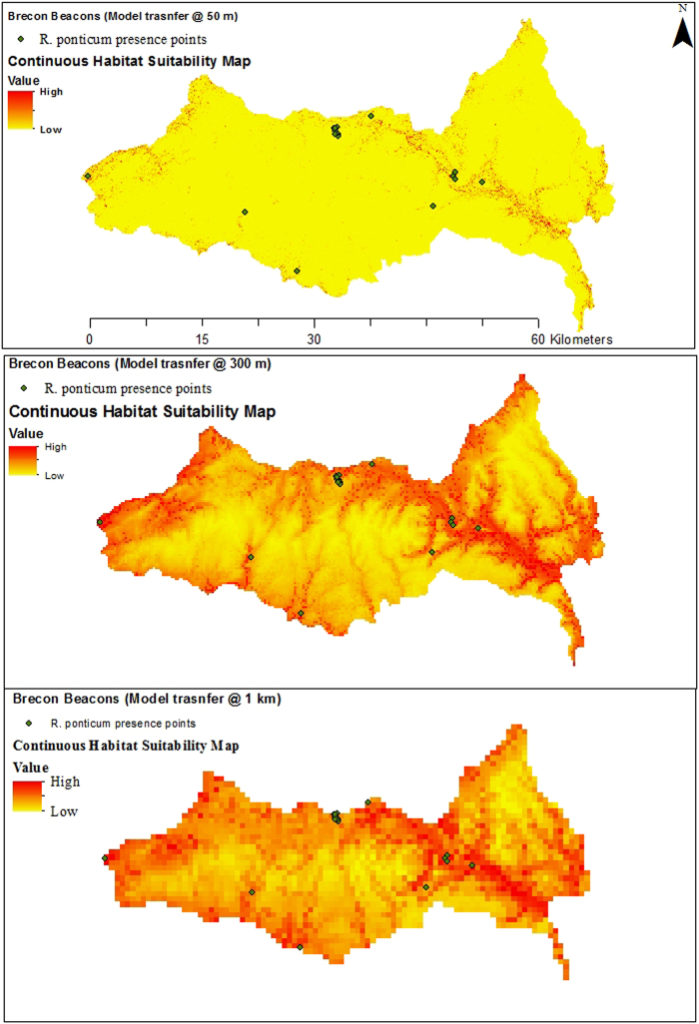 To supplement our results, we reviewed a sizeable number of recently published papers on this subject and found that the choice of grain size in SDM studies is often based on data availability rather than relevant factors like species’ ecology and spatial scale of study. We suggest that such an approach is likely to decrease model performance; the challenge, therefore, is to establish the threshold grain size at which predictor variables correctly describe local conditions and biotic interactions which play an important role in defining species’ range.