Eat your carrots – otherwise your risk of getting Alzheimer’s might increase!

Vitamin A is an important component of human nutrition, delivered by e.g. liver or fish dishes, but also fruits and vegetables, such as carrots. It is not only needed for development of organs and tissue (e.g. the retina) but it might also be essential for the brain’s proper maintenance in later, adult life. It has been shown that for example adult neurogenesis or function of synapses depends on the bioactive metabolite of Vitamin A – retinoic acid – which derives from oxidative processes. Many regulatory mechanisms that are driven by retinoic acid are mediated by retinoic acid receptors (RARs) that are bound to specific regions on target genes, waiting for being activated by the vitamin metabolite. 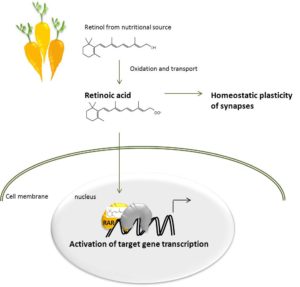 Fig. 1. Dual role of retinoic acid for neuronal functions. Retinol derives from nutritional sources and is converted to retinoic acid. This bioactive compound is then transported to the target cell. Within the cell, retinoic acid can undertake two distinct functions: 1) non-genomic such as in homeostatic plasticity of synapses by allowing local protein translation or 2) genomic by binding to nuclear RARs localized on their respective target genes as a ligand.

Development of Alzheimer’s disease has been discussed to correlate with Vitamin A malnutrition or malfunctioning of retinoic acid signaling: genes encoding for enzymes that are involved in Vitamin A metabolism or transport have been found mutated and a lowered Vitamin A level in serum has been described in Alzheimer disease patients as compared to healthy controls. Interestingly, one of the enzymes that might be beneficial in Alzheimer’s disease has been found to be positively regulated by retinoic acid: the amyloid precursor protein (APP) might be cleaved by so-called beta- and gamma-secretase, this then gives rise to neurotoxic peptides (A-beta peptides) which deposit as amyloid plaques in the brain of Alzheimer disease-affected patients. The alpha-secretase ADAM10 (A disintegrin and metalloproteinase 10), however, can cleave at an alternative site, thereby prevent formation of the toxic peptides and liberate a neurotrophic and neuroprotective soluble fragment from APP – the sAPP-alpha.

In cell culture and in mice, treatment with retinoic acid or with an enhancer of free cellular retinoic acid (acitretin) led to increased amounts of ADAM10 accompanied by increased sAPP-alpha secretion and lowered A-beta amount. Lowering of Vitamin A levels – on the contrary – by dietary deficiency in mice did not decrease ADAM10 amounts. However, toxic A-beta peptides increased. This pro-pathogenic condition could be ameliorated by two weeks of re-feeding a Vitamin A sufficient diet which resulted in an increase of ADAM10 and sAPP-alpha and a decrease in A-beta peptides. In sum, this indicates that Vitamin A hypovitaminosis might contribute to Alzheimer pathogenesis.

Fig. 2. Effect of dietary Vitamin A on APP proteolytic processing. Studies in mice suggest that either restoring Vitamin A levels or elevating intracellular retinoic acid levels might represent a valuable therapeutic approach in Alzheimer’s disease by shifting APP processing towards the non-amyloidogenic ADAM10-dependent pathway (green).

When compared in a neuronal cell culture model, treatment with retinoic acid on a full nutrition status and from a deficient status resulted in in a large overlap of gene expression changes, although they were more intense within the deficient cells. However, several genes thought to be protective in Alzheimer’s disease were elevated by the treatment besides ADAM10, as for example the brain derived neurotrophic growth factor (BDNF). Therefore, restoration of a normal nutritional condition in regard to Vitamin A as well as treatment starting from a well-nourished background could serve as a therapeutic approach by shifting the cleavage of APP towards the non-amyloidogenic pathway.