In an important step towards the development of “wastewater power plant” and “bacterial batteries”, a new study published in the journal of “Bioresource Technology” developed a facile strategy to improve the power output of microbial fuel cells (MFC)-a device which can produce electricity from wastewater. 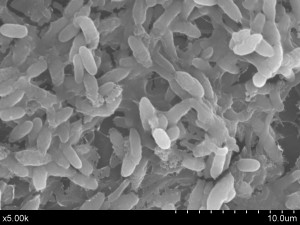 l cells use rare metals to catalyze the conversion of chemical energy to electric energy， MFC can use bacteria as the catalysts. The bacteria can “eat” the organic matters in the wastewater, and decompose them to release the chemical energy (electrons) and store inside the cells. Some electric bacteria can produce electricity by shuttling electrons across the membrane and passing them to the electrode. Therefore, the membrane permeability of cells determined the efficiency of electron shuttling process as well as the power output.

The improvement of electron shuttling across the bacterial cell membrane could enable scientists to develop high efficient bacterial batteries for energy harvesting from wastewater (wastewater power plant) or for self-powered environmental monitoring in remote areas, for example. More impressively, it may also enhance the efficiency of its reverse process—uptaking electricity from the electrode by bacteria, which is a new promising/green approach to produce value-added chemicals by bacteria.