Cigarette smoking is a significant risk factor for numerous health consequences and related disorders, and is found to affect non-smokers when they are exposed to second-hand smoke (SHS). Accurate epidemiological assessments of people who currently smoke are important in managing the negative effects of both active and passive smoking, as well as for developing effective public health policies.

Recently, trace gases emanating from human skin surfaces have been attracting considerable attention in their role as a source of body odour, mosquito attractants, and as a potentially non-invasive biomarker of individual physiological status. Although the volatile compounds involved are mostly synthesised by either internal metabolism or bacterial activity on the surface of skin, exogenous chemicals can also be released when resistant to internal metabolism. These exogenous chemicals generally rise to the skin’s surface through either perspiration and/or directly from the blood, as an expansive network of blood capillaries lies just beneath the skin’s surface. As mainstream cigarettes contain various chemicals, including nicotine and its heat-induced by-product, 3-ethenylpyridine (3-EP), cigarette smoking is a potential cause of dermal-based emission of exogenous chemicals. 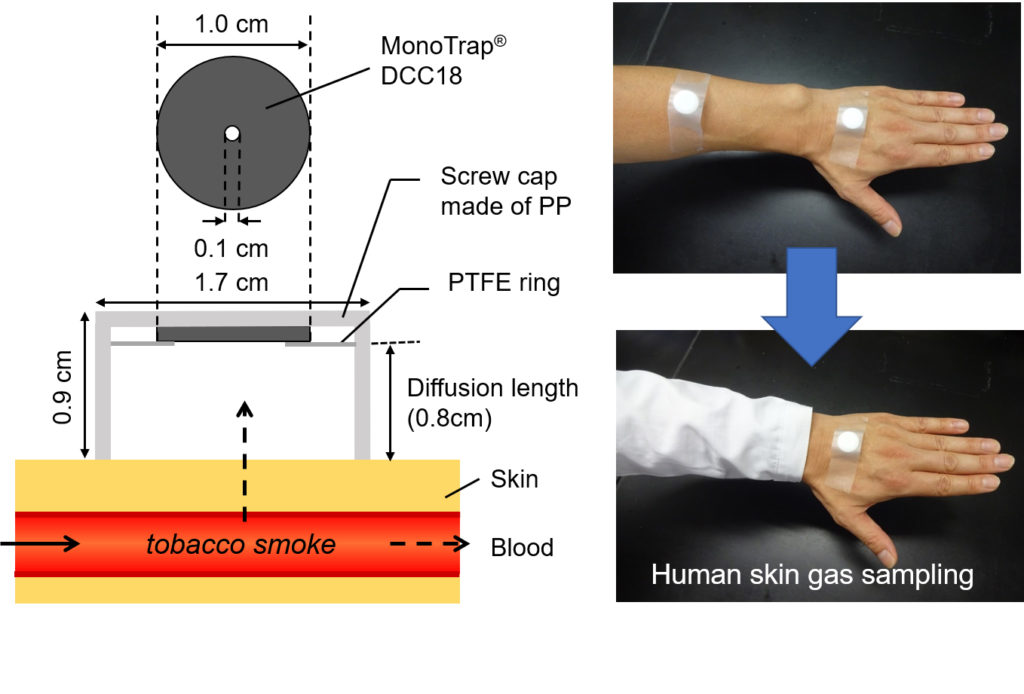 Fig. 1. Sampling of tobacco smoke emanating from human skin surfaces at the forearm and back of the hand before and after cigarette smoking or exposure to SHS. The PFSs were placed on the skin surface and were fixed by a piece of medical tape. The PFS placed on the forearm was covered with a sleeve in order to prevent surface contamination.

To investigate the influences of active cigarette smoking and exposure to SHS on the composition of gas emitted by the human skin, the dermal emissions of volatile compounds were non-invasively measured from volunteers who either smoked a cigarette or were exposed to SHS using a passive flux sampler (PFS, Fig. 1). As the PFS employs a passive molecular diffusion process, it does not require a power supply. The PFS was simultaneously fixed onto the surface of both tested smokers’ and non-smokers’ forearms, as well as the backs of their hands, in a gentle fashion. The forearm was covered with a sleeve, whereas the hand was completely exposed to air, in order to investigate the effects of surface contamination by the emission of tobacco smoke by the skin. Sampling duration was one hour for each sample collected. After sampling the chemicals, the composition of the trapped gases was determined by gas chromatography – mass spectrometry.

Smokers smoked a single cigarette within 15 minutes. Numerous chemicals were detected in the samples collected from them immediately after the smoking event, including tobacco-specific chemicals such as 3-methylfuran, 2,5-dimethylfuran, 3-EP, and nicotine. No apparent surface contamination was observed, as most peak intensities of the forearm samples were equal to, or were even greater than, those measured from the back of the hand. A typical time course of nicotine is shown in Figure 2a. The peak intensity occurred immediately following cigarette smoking, and gradually decreased over time. However, greater variations were found in the active smokers. This is likely because these dermal emissions were affected by the smokers’ physiological conditions that are, themselves, influenced by each person’s smoking history, choice of cigarette brand, smoking duration, and puff frequency. Therefore, the dermal emissions accurately reflected the current smoking statuses of the participating smokers.

Meanwhile, the dermal emissions of tobacco specific volatiles were also found within the non-smokers who were exposed to SHS in a smoking room for 30 minutes. Interestingly, the dermal emissions of nicotine increased gradually after the passive smoking event (Fig. 2b). The dermal emission rate of tobacco smoke is potentially affected by its absorption into the body, one’s metabolism, mass transfer from blood to skin, and mass transfer from skin to air. The slowest step of the process determines its overall rate. For the passive smokers, the rate-determining step is likely the absorption process, because the amounts of tobacco smoke inhaled by a non-smoking person’s lungs are generally much lower than that of active smokers. Thus, the time periods in the measurements of the passive smokers differed from that of active smokers.

Fig. 2. Time courses of the peak responses of nicotine in the samples collected from the forearm and back of the hand of three active smokers (a), and forearm of two passive smokers (b).

These results indicate that both cigarette smoking and exposure to SHS may contribute to human body odour through modifying the composition of skin gases. These findings also indicate that the human body, itself, can be a source of tobacco smoke in a living environment. Therefore, we propose the use of tobacco specific chemicals emanating from human skin surfaces as a potential, non-invasive biomarker for the monitoring of current smoking statuses of various populations.