Evaluating the effectiveness of marine debris policies at a local level

Slow to break down and nearly indestructible, plastics can last persist in the environment for thousands of years. Even more astounding is the amount of plastic that annually ends up in our ocean – an estimated 8 million tons! Once in the ocean, plastics cycle through food webs and eventually make their way into the stomachs of sea birds, sea turtles, and even larval fish. Due to the environmental impacts of marine debris, particularly plastic pollution, nonprofits, individuals, and even local governments have begun clamoring for policies that would curb the amount of debris entering our ocean.

Hawaii has been at the forefront of marine debris policy, recently becoming the first state to ban single-use plastic bags. The state has also implemented policies that aim to reduce cigarette butt litter (the most commonly littered item in the environment) by prohibiting the use of tobacco products at all State beaches and county beaches on Maui, Oahu, and Hawaii Island. Questions remain, however, regarding the effectiveness of these policies and mitigation strategies. Furthermore, the creation of successful policies requires us to understand where debris is coming from and which debris items are most common.

Our goal with this study was to evaluate the success and effectiveness of local marine debris mitigation strategies, particularly plastic bag bans. Using a combination of daily and monthly beach surveys, the study compared debris loads at three different sites on Maui, determined environmental factors that significantly influence debris accumulation, and identified the most common debris items.

On the other hand, leeward study sites on Maui’s south and west shorelines saw a greater prevalence of land-based debris, most notably cigarette butts.

By comparing the debris loads at different sites, the study determined that ocean-based debris was a much more significant contributor to Maui’s local debris loads than debris items that may be left behind by beachgoers. While these findings do not suggest that local efforts be abandoned, they do highlight the need to initiate marine debris conversations on an ocean-wide scale. 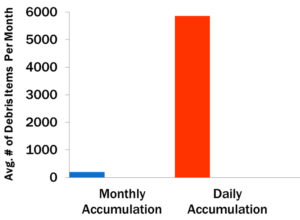 Fig. 2. Compares the rate of debris accumulation as estimated by monthly versus daily sampling. Monthly debris surveys result in a significantly lower amount of debris than when sampling is conducted on a daily basis.

Another important finding was that although plastic bags consistently rank as one of the top 10 most common debris items in Hawaii (per annual International Coastal Cleanup data), not one plastic grocery bag was collected throughout the entirety of this study. This illustrates that, to some extent, marine debris policies can effectively reduce the prevalence of certain debris items.

In addition, the study found that debris accumulates at a much higher rate than previously thought.  In general, the vast majority of shoreline marine debris studies sample once per month. When evaluating on a daily basis, however, the study found that debris accumulation depends significantly on daily variations in wind and tides. Monthly surveys can’t capture these daily extremes.

For example, 30 times the amount of debris was collected when sampling was conducted on a daily versus monthly basis. On calm weather days, as few as 20 pieces of trash could be collected at a site, whereas an increase in wind could result in collecting over 1,000 debris items at the same beach a mere 24 hours later.  These results indicate that monthly surveys are likely underestimating marine debris loads and the rate of debris turnover.

Marine debris is a really dynamic beast. It is not a ‘one-size-fits all’ problem, and because of that, local data is not only imperative, it’s the only way to ensure that that we are effectively targeting the biggest debris culprits.

To solve the issue of marine debris, we stress the need for a holistic approach, one that combines a shift in industry standards with improved public awareness and waste management. Ultimately, though, we need to figure out how to prevent debris, particularly plastics, from reaching our ocean, lakes, and streams in the first place.