Evolution of aquatic mammals and birds: the present predicts the past

The movement of vertebrates from the water to the land has been considered one of the great evolutionary transformations in history. However of equal evolutionary importance was the re-invasion of the aquatic environment by various groups of terrestrial adapted vertebrates. With approximately 70% of the planet’s surface covered by water, it is not surprising that a wide variety of vertebrate lineages have secondarily invaded the aquatic environment. As opposed to the single point of entry in the transition from water to land, the reverse movement was accomplished by diverse vertebrate lineages at different times. For example, modern sea turtles were derived from terrestrial reptiles, penguins developed from flying birds, and dolphins and whales evolved from hoofed mammals. Regardless of the lineage, the strong selective pressures required convergence of streamlined body forms and propulsive mechanisms to move in the dense medium of water. However, the wide diversity of groups making the transition also fabricated different solutions for high performance swimming in the aquatic environment that were constrained by the ecology, history, and phylogeny of each group. Examination of swimming by secondarily aquatic vertebrates provides opportunities to understand potential selection pressures and mechanical constraints, which may have directed the evolution of these aquatic species. 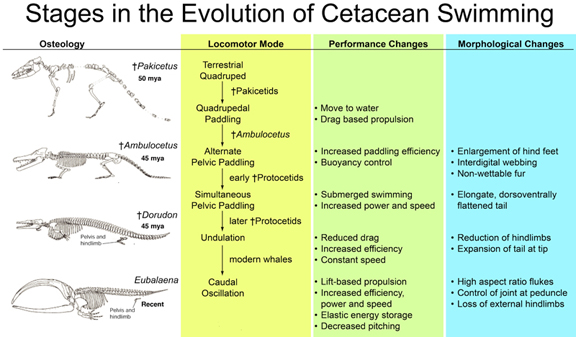 Fig. 1. Summary of associated osteological features, swimming modes, locomotor performance, and morphological changes in the evolution of the Cetacea.

A biomechanical model had been developed previously that considered the evolution of propulsive systems in secondarily aquatic mammals (e.g., cetaceans, sirenians, pinnipeds). As there was a paucity of fossil evidence, the model predicted the transitional stages from terrestrial to fully aquatic mammals from the anatomy and swimming behaviors of modern species. Initially in the evolution of aquatic mammals, swimming was accomplished in intermediate, semi-aquatic species by using paired appendages in a low efficiency, drag-based paddling mode and undulations of the body and tail (Fig. 1). These modes of swimming arose from the modification of existing neuromotor patterns, associated with gaits characteristic of terrestrial locomotion. The evolution of advanced lift-based swimming modes occurred in concert with changes in buoyancy control for submerged swimming, and a need for increased speed and locomotor efficiency. The most derived aquatic mammals evolved three specialized lift-based modes of swimming that included caudal oscillation (i.e., dorso-ventral oscillation of the caudal flukes of cetaceans and sirenians; Fig. 1), pectoral oscillation (i.e., wing-like flapping of the foreflippers of the otariid sea lions and fur seals), and pelvic oscillation (i.e., alternating side-to-side oscillations of the hindflippers of the phocid seals and walrus). A re-evaluation of the model was performed as numerous fossils of transitional forms were described within the last thirty years that validated much of the model (Fig. 1). 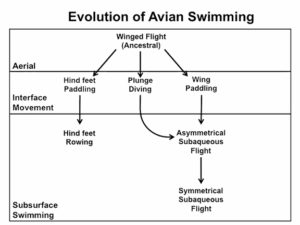 Fig. 2. Model for sequence of swimming mode transitions from flying to swimming birds. Winged swimming using symmetrical subaqueous flight, as exemplified by penguins, had possible intermediate stages from winged paddling and/or plunge diving as exemplified by alcids. Subsurface hind foot rowing, used by loons and grebes, was predicted to have gone through a hind foot paddling stage at the air-water interface.

For aquatic birds that were originally adapted for aerial flight, fossil evidence has been less forthcoming to explain the transition to aquatic capabilities. A biomechanical model proposed for aquatic birds considered that wing swimming could have evolved initially from either plunge diving or surface wing paddling (Fig. 2). Both routes would have converged to modified underwater wing flapping propulsion that is similar to the motions of aerial flight in which thrust is derived from a lift force produced mainly from the down-stroke. The evolution of highly derived penguins would have required symmetrical thrust generation on both up-stroke and down-stroke. Alternatively, underwater foot-propelled swimming would have changed from drag-based paddling at the water surface to lift-based rowing underwater.

Both birds and mammals evolved specialized lift-based propulsion for movement in water. The convergence in morphology and propulsive mechanics was dictated by the need to increase speed, reduce drag, improve thrust output, enhance propulsive efficiency and control maneuverability in the aquatic environment.