Myocardial infarction (MI) is still the leading cause for mortality in the Western World. Up to date, the only therapeutic strategy is heart transplantation which is limited by the small number of available organs. In the last decade, the research has focused its attention on cardiac cell therapy as a potential alternative tool to repair a damaged heart and restore, at least partially, its function after injury. The idea was that transplanted cells, once injected in the infarcted tissue, could regenerate new cardiomyocytes. However, pre-clinical studies in different animal models have shown that many of the injected cells are lost within few hours after injection, so that only about 5-10% of them can be detected after 1 day. 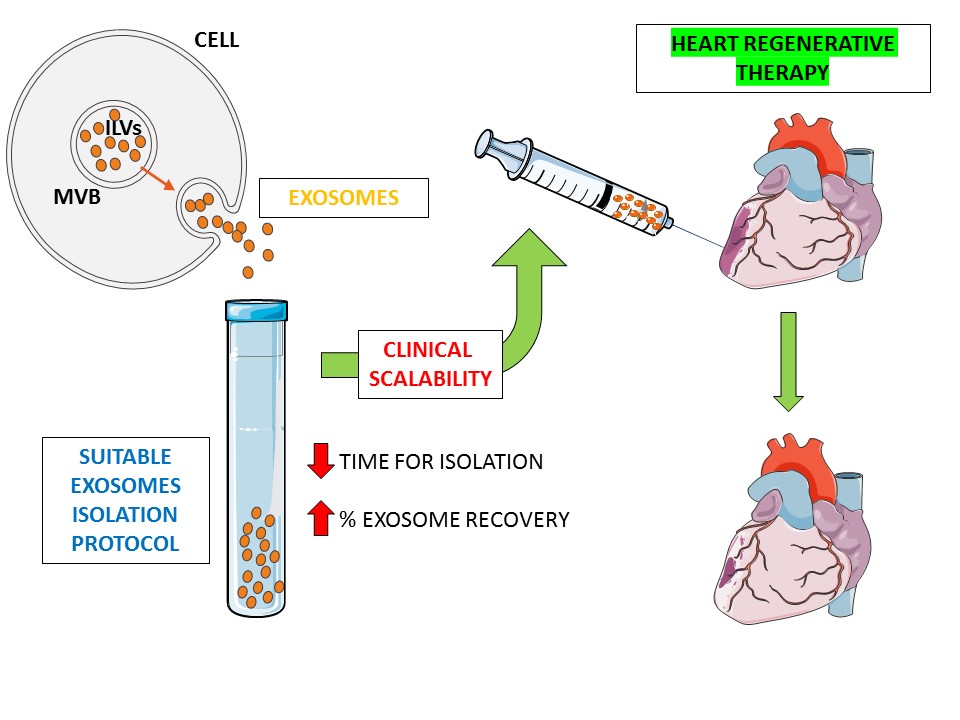 Fig. 1. A schematic view of an exosome-based regenerative therapy protocol for myocardial infarction. The key point is represented by the selected microvesicles isolation protocol in order to improve the percentage of isolated particles and to reduce the procedure timing. These two aspects represent the starting point to create the basis for a clinical scalability. (Image created with Servier Medical Art)

Furthermore, a huge number of cells that have been initially retained die because of the unsuitable ischemic microenvironment of the damaged tissue. Moreover, the cells that still survive in the heart have not shown the ability to directly differentiate into new cardiomyocytes. However, based on the evidence that cell injection has a positive outcome on heart function, a new idea has been formulated: the paracrine hypothesis. The rationale of this idea is based on the increasing evidence showing that the observed therapeutic effects are partly mediated by stem cell secretion of molecules or vesicles. Exosomes are bi-lipid membrane vesicles that belong to the extracellular vesicles (EV) class (Fig. 1). Among these, exosomes are the only ones that originate within cells and are homogeneous in shape and size (40-100nm). Their biogenesis starts from the inward budding of the membranes of a structure called multi-vesicular bodies (MVB), resulting in the formation of many intraluminal vesicles (ILVs). During ILVs formation, the proteins included in the MVB membrane are incorporated into the folding ILV membrane while the cytosolic components are engulfed within the vesicles. The MVBs move up to the cell surface, fuse with the plasma membrane and, finally, release ILVs outside the cell. Exosomes have been isolated from a variety of body fluids (such as urine, saliva and plasma), which means that they are released by several cell types. Thus, their content, in terms of proteins and nucleic acids (such as DNA and RNA) depends on the cell of origin. For long time exosomes were considered as simple containers for cell waste, but up to date they were underlined as cellular structures involved in cell-cell communication. Once released by the cells, they are able to interact with other cells inducing, according to the delivered molecules, a modulation of the phenotype towards a differentiated or activated state. Exosomes have been extensively studied in cancer research and immunology, suggesting novel approaches involving them as biomarkers or immunotherapeutic agents. In the last decade, the role of exosomes as one of the key factor for heart regeneration has emerged, considering the tremendous impetus given to their biotechnological and clinical translation. Besides, it has been shown that exosomes yield, characteristics and subsequently their effects on cells, are influenced by the isolation protocol used.

Therefore, for reliable research data collection, underlying any possible future clinical perspective, many isolation methods will have to be developed to reach a high degree of exosome recovery and specificity, to reduce procedure time and to use easily accessible equipment (Fig. 1). Up to date, every method presents pros and cons that, in different ways, block a possible scalability for a future clinical translation. It could be important, at least in some well-known therapeutically powerful cell culture protocols, to consider the best suitable isolation method while planning a characterization of cell specific exosomes. The acquired experience may therefore improve the results quality and reliability, making exosomes a new real therapeutic tool.