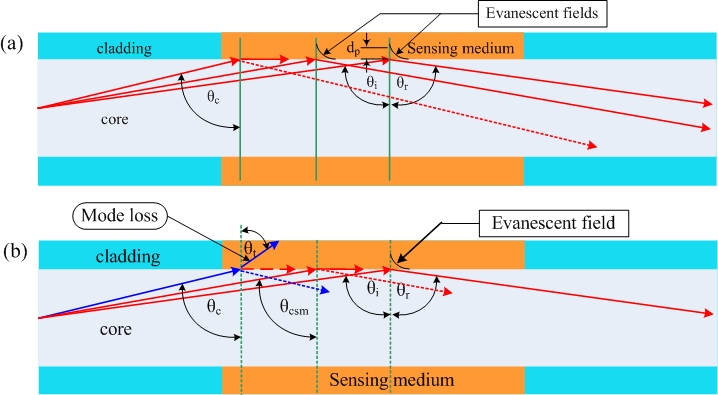 Furthermore, for long term in situ measurement and size consideration, optical fiber refractometers (OFRs) are generally the most suitable alternative compared to other refractometer types. The OFR demonstrated here is based on the modulation of an optical intensity propagated in a stripped-cladding multimode fiber (MMF). This refractometer is relatively easy to realize and/or fabricate, and is highly suitable for deployment in the natural environment since it does not require complex and costly detection instruments. Any RI variation will induce an optical power variation in the MMF which can easily be detected by an appropriate photodetector.

The response of a stripped-cladding MMF refractometer have been comprehensively simulated with functional models combining Gaussian beam propagation, ray optics, and wave optic analysis. This approach enables to classify three sensing mechanisms in the MMF refractometer. The first is by evanescent wave absorption (EWA), corresponding to the Zone I operating regime, when the sensing medium index nsm is lower than the cladding index (ncl) or an equivalent index nb with respect to the incident beam angle (θb). Here, the guided rays which reach the sensing area are guided by total internal reflection (TIR) without any transmitted or refracted rays into the external sensing medium (SM). Under this condition, the evanescent waves exist at the core-SM interface which can be absorbed by SM (Fig. 1a) over a penetration depth (dp) of wavelength-order. The second mechanism is a combination of EWA and mode loss (or Zone II operating regime) when nsm is higher than ncl or nb, but less than or equal to the core index (nco), for which some rays with incident angles < θcsm (i.e. the critical angle corresponding to nsm) will be refracted and lost to SM (blue line in Figure 1(b)). The remaining rays still guided by TIR, on the other hand, will continue to generate evanescent waves (see red lines in Figure 1(b)). The third condition (or Zone III regime) occurs when nsm > nco. Here, no ray is guided by TIR although some portion of the ray is reflected by Fresnel reflection as illustrated by the dotted lines in Figure 1(b). These results validate the functional models that have been developed in this research, where in Zone I a low sensitivity is obtained since only weak EWA contributes to the sensing mechanism, Here, the highest absorption is achieved by the longest sensor (4-cm). On the contrary, the highest sensitivity is obtained in Zone II due mainly to the mode loss mechanism as illustrated by the green curve. Also, most EWA losses in this zone are achieved by the longest (4-cm) sensor due mainly to the higher number of reflections occurring along this sensor. In Zone III, although the initial guided power is very weak, this increases with increasing RI, in particular, for the shortest sensor due to fewer number of reflections which induces less optical power losses compared to the longest sensor.