The Mexican-USA Commission for the Prevention and Diagnosis of Foot and Mouth Disease laboratory (CPA) plays a critical role for the diagnosis and surveillance of animal diseases in Mexico. In this level 3 biosecurity facility foreign viral diseases are diagnosed that represent an important threat for the livestock industry, and consequently for the economy of Mexico.

In this context, the activities conducted by the CPA are not only focused on the diagnosis of foreign viral animal diseases, but also in the surveillance of endemic diseases with the potential to emerge, or because they constitute a differential diagnosis with a foreign animal disease. 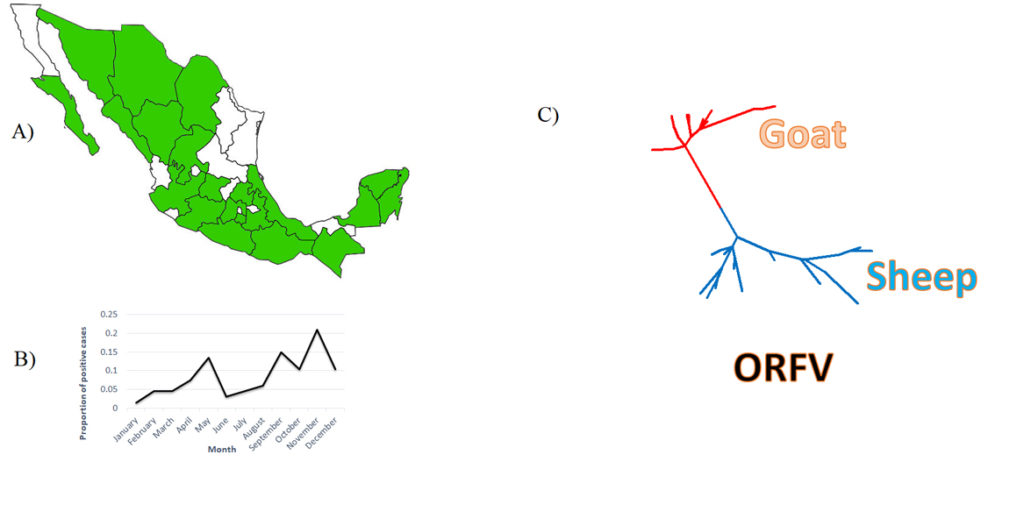 Fig. 1. Summary of results.
A) Spatial-temporal distribution of parapoxvirus species in Mexico. Epithelial lesions collected from cow, sheep and goat from multiple states in Mexico during 2007 to 2011, and previously screened negative by the presence of FMDV and VSV, were subjected to PCR analysis for the detection of ORFV, BPSV and PCPV. States where positive samples were found are colored in green. B) The proportion of positive cases during the study was graphed through the months of the year. C) Positive PCR samples were sequenced targeting the entire B2L gene. Phylogenetic analysis conducted by maximum likelihood showing the genetic diversity of ORFV in Mexico, which was host associated in two different genetic groups.

An example of one of these situations is foot-and-mouth disease (FMD), from which Mexico has been free since 1954, is a reportable foreign animal disease, and considered one of the most contagious and economically devastating viral diseases for the worldwide livestock industry. Surveillance activities for FMD are based on reports in the field associated with presence of epithelial lesions on livestock (cattle, sheep, goats and pigs). Since multiple animal diseases resemble the clinical signs produced by FMD, epithelial lesions must be sent to the laboratory to rule out the presence of foot-and-mouth disease virus (FMDV). Meanwhile, quarantines are imposed to infected farms until the absence of FMDV is confirmed.

Some of the diseases circulating in Mexico that clinically show a vesicular resemble the clinical signs produced by FMDV, are the ones associated with vesicular stomatitis virus (VSV), and with multiple parapoxviruses, including bovine papular stomatitis virus (BPSV), ORF virus (ORFV), and pseudocowpox virus (PCPV). On a regular basis, different diagnostic methodologies are applied in CPA for the accurate and opportune diagnosis of FMDV and VSV.  In the case of BPSV, ORFV, and PCPV, they were described for the first time in Mexico early during the 80s, but since that time the genetic diversity and the temporal-spatial circulation of these viruses remains unknown in Mexico.

Roughly, 70 % of the annual number of samples associated with vesicular diseases on livestock in Mexico are from VSV, while the other 30% remain inconclusive. In this study, we aimed to describe the spatial-temporal circulation and the genetic diversity of parapoxvirus species in Mexico. For these purposes, we conducted a five-year study based on the analysis of epithelial lesions coming from naturally infected sheep, goats and cows form different parts of Mexico previously determined negative for FMDV and VSV by CPA. Positive samples by polymerase chain reaction (PCR) for different parapoxvirus species were subjected to sequencing and phylogenetic analysis to determine the genetic diversity. Our analysis was enhanced with the inclusion of viral sequences from recently discovered parapoxvirus species circulating in the US and Canada. All of these sequences were obtained during this study as a part of a collaborative agreement with Plum Island Animal Disease Center (USA), and the National Center for Foreign Animal Disease laboratories (Canada).

A graphic summary of the results is presented in figure 1. In conclusion, our results show that parapoxvirus species are widely spread in Mexico and constitutes the second most important etiology of vesicular diseases in livestock in this country. Also, the genetic relationship between the parapoxvirus species circulating in Mexico, USA and Canada, suggest that there is a common pattern of circulation for these viruses in North America.  The results of this study will help to improve the diagnostic techniques for ORFV, BPSV and PCPV in Mexico and will support future studies to get a better understanding about the importance of this virial genus in North America.