Suspended colloidal particles and pathogenic microorganisms are frequently the main contaminants in raw water. Thus, the major tasks in drinking water treatment are efficient turbidity removal and effective sterilization. Traditional technological processes for the production of potable water mainly include four steps, coagulation/flocculation, sedimentation, sand filtration, and disinfection. Turbidity can be effectively removed by the addition of a flocculant, which initiates a coagulation/flocculation process and thus purification of the water. Most microorganisms can be efficiently controlled and killed by disinfectants such as chlorine, which is commonly used in water treatment plants. However, with rapid industrial development throughout the world, the quality of raw water has seriously deteriorated. To meet national drinking water health standards, it must be heavily treated with large doses of flocculants and disinfectants. This implies not only higher treatment costs but also a greater risk of secondary pollution with adverse consequences for human health, such as the disinfection byproducts produced during chlorine disinfection processes. Therefore, a dual-function agent for water treatment with high-efficiency flocculation and antibacterial properties is needed. 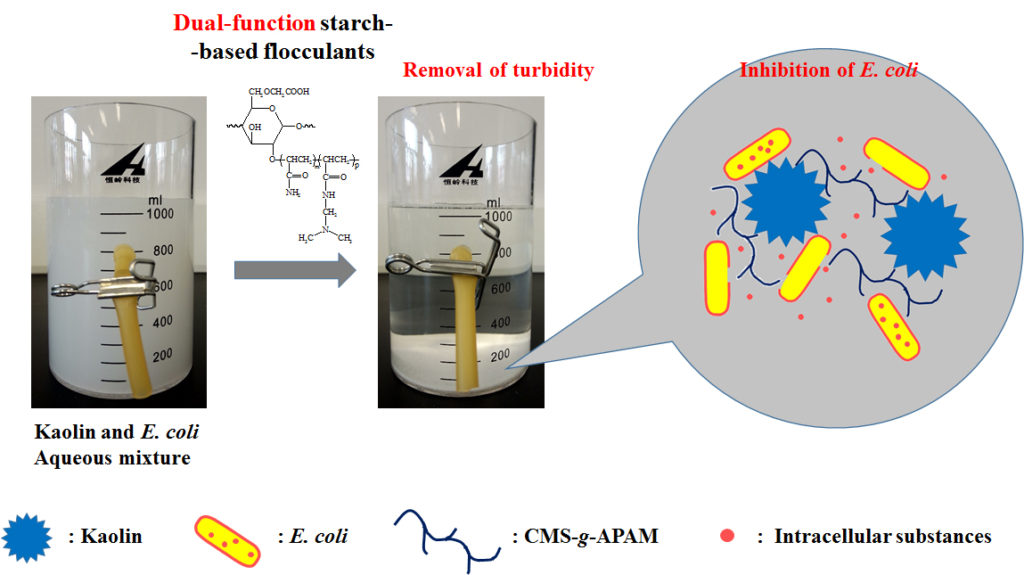 However, traditional flocculants, such as those that are inorganic-metal-based as well as synthetic organic polymeric flocculants, have no evident sterilization activities. Moreover, they themselves carry many health risks, due to residual metal ions or the release of noxious polymeric monomers into the target water. Recently, natural polymer based flocculants have been the focus of intense interest, due to their widespread availability, environmental friendliness, and biodegradability. Chitosan, a high-performance natural polymer, is highly effective not only as flocculant but also in their antibacterial properties, both of which are due to its distinct structural feature. However, the high cost of chitosan strongly limits its practical applications in water treatment.

Starch is considered as one of the high-performance and low-cost natural polymeric materials. Many kinds of efficient starch-based flocculants have been developed for water treatment because they are inexpensive, biodegradable, shear stable, and effective. However, little work has been reported regarding dual-function starch-based flocculants, and their widespread use need experimental validation in field operation. Considering that most suspended colloidal particles and pathogenic microorganisms are surface negatively charged, in this work, a novel cationic starch-based flocculant (carboxymethyl-starch-graft-aminomethylated-polyacrylamide, CMS-g-APAM) was successfully prepared by carboxymethylation for improvement of its water solubility followed first by the grafting of polyacrylamide (PAM) onto the CMS backbone and then by a typical Mannich reaction to introduce tertiary amine groups on the PAM. A aqueous mixture of kaolin and Escherichia coli (E. coli) suspensions was employed as synthetic effluent. Based on Figure 1, the starch-based flocculant not only effectively removed turbidity but it also disrupted bacterial cells. The flocculation and sterilization mechanisms can be both attributed to the effective electrostatic interactions between the cationic tertiary amine groups of CMS-g-APAM and the negatively charged surface of the two contaminants: kaolin and E. coli, resulting in de-stability, aggregation, and final precipitation of the suspended colloidal particles as well as partial destruction of the bacterial cell wall.