Microbial rhodopsins are photoreceptive seven-transmembrane proteins that contain all-trans retinal as a chromophore. Upon photon absorption, these proteins undergo a cycling photoreaction, where first the initial trans-to-cis isomerization of retinal induced by illumination leads to the formation of several spectroscopically different photointermediates (K, L, M, N, O, etc.), with a conformational change of the protein moiety. Subsequently, these photoproducts return to their unphotolyzed state through the thermal cis-to-trans re-isomerization of retinal. During this so-called “photocycle,” individual functions are performed, including the transportation of some ions (e.g., H+, Cl–, and Na+) and photosignal transduction. 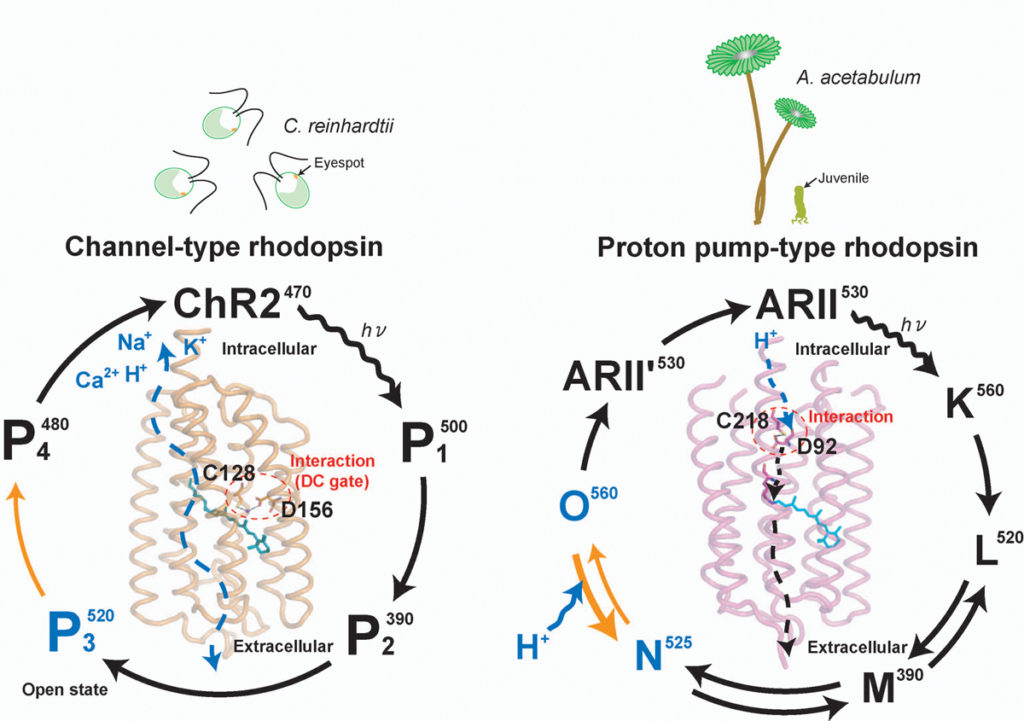 In the past two decades, microbial rhodopsins—the existence of which was originally confined to halophilic archaea—have been found in various other microorganisms, such as eubacteria or lower eukaryotes, including fungi and algae, indicating their expanded distribution in nature. Many of the microbial rhodopsins discovered from algae function as a light-gated ion channel (named channelrhodopsin). Two representatives are cation channel-type rhodopsins (ChR1 and ChR2) from Chlamydomonas reinhardtii, a microalgal species that is widely distributed in soil and fresh water. Upon illumination, ChR1 and ChR2 generate large photoelectrical currents, caused by the passive transfer of several monovalent or divalent cations (e.g., H+, Na+, K+, and Ca2+) across the cell membrane, resulting in phototactic responses in C. reinhardtii. Microbial rhodopsins, especially channel-type or ion pump-type rhodopsins, are starting to be used commonly in the field of neural science as useful tools for the noninvasive and specific manipulation of neural activities in a technique termed “optogenetics”; that is, use of light to stimulate the nerve cells expressing these proteins. In ChR2, the most frequently used optogenetic tool, it was found that the interaction between cysteine and aspartic acid residues on different helices (C128ChR2 on helix C and D156ChR2 on helix D) was functionally important. When the interaction was altered by the replacements of either C128ChR2 or D156ChR2 or both, the lifetime of the photolyzed conductive state was significantly lengthened.

However, two homologous genes encoding light-driven proton pump-type rhodopsins were cloned from a giant unicellular marine green alga, Acetabularia acetabulum. They were named Acetabularia rhodopsin I and II (ARI and ARII, also abbreviated as Ace1 and Ace2, respectively). Of the two ARs, ARII has a unique property in the cytoplasmic transmembrane region. The previously resolved X-ray crystal structure of ARII revealed interaction between an aspartic acid residue that was related to the proton transfer in the cytoplasmic side (D92ARII) on helix C and a cysteine residue (C218ARII) on helix G (Wada et al., J. Mol. Biol. 411:986-998, 2011). Although the importance of the Asp-Cys interaction in channel-type rhodopsins has been pointed out as described above, the functional role of the similar interaction in proton pump-type rhodopsins is still unknown.

In this work, we investigated how the photoreactivity of ARII is affected by two kinds of replacements of C218ARII: C-to-A replacement to break the interaction, or C-to-S replacement to potentially create a stronger interaction. From the analysis of the photocycles of these mutants using flash photolysis spectroscopy, the photocycle turnover rate in the mutants was found to be slower than that in the wild type. The primary factor for the photocycle delay was the restrained N-to-O transition, during which a proton is taken up from the intracellular space to deprotonated D92ARII. Thus, we inferred that the native weak interaction between D92ARII and C218ARII is indispensable for proper proton translocation in the cytoplasmic channel.