Grow TiO2 nano-crystals on cellulose to sequester lead in water

Heavy metals in water pose significant threat to environment and public health. Lead, for example, when present above the action level in drinking water as a toxin, can cause a variety of adverse health effects such as delays in physical and mental development, kidney problems or high blood pressure. Therefore, removing lead from water to safe level is a non-brainer in developed countries, but remains an issue in many parts of the third world. The current allowable maximum contamination level of lead in drinking water set by US EPA is 15 parts per billion. There are many ways to isolate lead from water, but easy, efficient and cheap approach is always wanted, particularly for very dilute contamination. Selective adsorption is believed to be such an approach and the key to its success lies in the selection of appropriate sorbents. 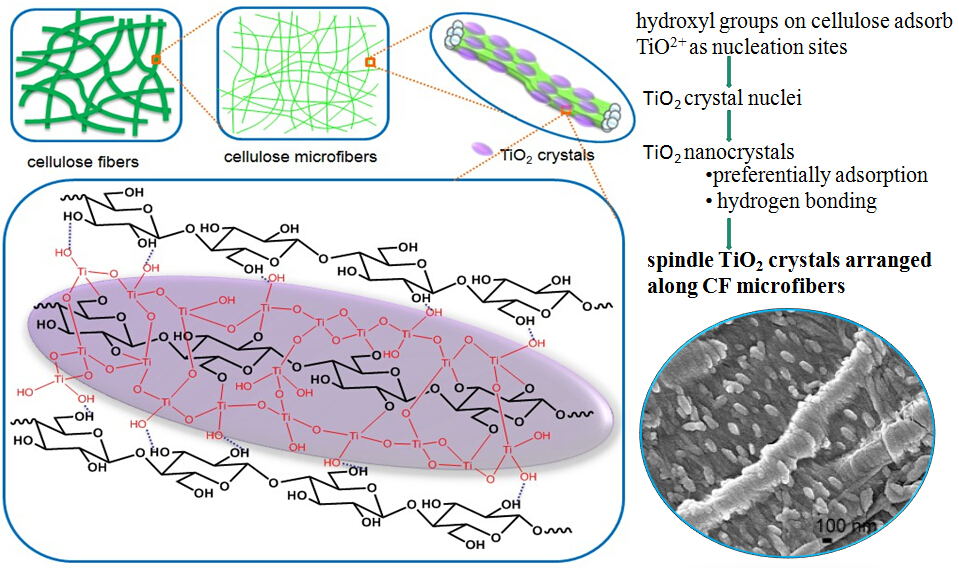 Nano-TiO2 crystalline particles, typically seen in body lotion and car paint have been identified as one of such sorbents for precision lead sequestration. However, it is hard to use them directly for water clean-up because on one hand, they tend to agglomerate resulting in reduced efficiency; on the other hand, they are too small to recover and re-use, causing unavoidable secondary pollution to the environment they are intended to protect. Obviously, these tiny particles need to be bundled with something bigger to help them work in a secured manner, and nature has inspired us to find the solution.

Nature provides us with enormous amounts and varieties of plants such as trees, grass and agricultural products. Imagine apples hanging in an apple tree, seeds growing out of stalks of switch grass. The basic component of these nature offerings is cellulose that we take advantage of in our daily lives. The living cells of these plants can eat in minute amounts of heavy metals that we call pollutants; when the cells are dead, they can still do so with or without artificial treatment. Well, these materials, although can be burned and degraded, but are never going to be exhausted. They offer the possibility as being the hosts to accommodate man-made TiO2 nanoparticles to make water clean, even with synergy.

Bearing the idea in mind, we picked up cellulose fibers made out of wood, and found a way to anchor, or rather grow and secure TiO2 nano-crystals in-situ on them by hydrolysis of a common salt TiOSO4 at 70 ºC. Cellulose ﬁbers are soft and can be readily made into a form of filter paper for more convenient use. Cellulose also has abundant hydroxyl groups, which makes it a good water soaking product. But what we discovered was amazingly cool that these groups could even manipulate how crystals forms and to which direction they grow. As a result, oval instead of round crystals were generated nicely on cellulose surface, with preferred orientation along the microfiber direction, with uniform size distribution and without agglomeration. Moreover, the TiO2 nanocrystals created this way are not the expected anatase but are the rutile that barely appears at such a low temperature for the hydrolysis reaction. The picture below is a schematic illustration of how the spindle TiO2 grows directionally along cellulose microfibers and the surface morphology of the formed composite.

The composite fibers have enhanced lead adsorption even with a very small amount of generated TiO2 on the surface. The fibers are also very selective to lead and can be repeatedly used after re-generation. When made into a filter paper, the advantage is more obvious compared with another paper filter made from composite fibers consisting of even smaller TiO2 nanoparticles self-assembled to the same cellulose fibers. The approach taken in this work is expected to offer a green pathway, with the help of natural products, to make and use low cost and high efficiency nanosorbents for water decontamination for the better of human life.