Hair shedding in women: how much is too much?

Female pattern hair loss (FPHL) is the most common form of hair loss in women and reduces quality of life for sufferers. It is characterised macroscopically by hair loss and balding on the mid-frontal scalp and microscopically by increased variation in hair fibre diameter, fewer hairs growing from individual pores, and hair follicle miniaturisation. When treatment is imitated early, these changes are partly reversible, however over time hair loss becomes irreversible. Early diagnosis increases the likelihood of successful treatment. 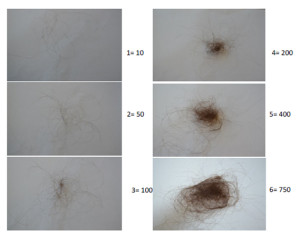 Women normally shed between 50 and150 hairs per day. Those who report excessive hair shedding may have an actual increase in hair fall, or they may instead have an increased awareness of normal hair shedding. The ‘hair pull test’ does not reliably discriminate between normal and excessive hair shedding. A tool to identify increased hair shedding would facilitate early diagnosis of FPHL, and allow treatment to commence before the process becomes irreversible.
To measure shedding, a visual scale was developed by dividing shoulder length hair into six bundles of different sizes. The number of hairs in each pile were counted and the piles were then photographed and arranged according to size (see Figure).

The first part of the study investigated whether participants could consistently score their own hair shedding using the visual scale. This initial testing included 50 women with known FPHL. Participants were shown the hair photographs described above and asked which bundle represented the amount of hair they shed on a hair wash day and a non-wash day. The results were scored from one to six, with one being the lowest amount of shedding and six the highest. Shedding was then reassessed one to two weeks later.

46 out of the 50 participants had the same scores at both assessments, while the remaining four participants only had a one grade difference in their shedding score. All four women with variations in shedding score had short hair. Since short-haired women had greater difficulty using the chart (which was created from long hair), short-haired women were not included in the rest of the study.

The second part of the study investigated hair shedding in 209 long-haired women with recently diagnosed, untreated FPHL.  The women were asked to score their hair shedding using the photographic scale. Their results were compared with a group of 100 schoolgirls aged 11-15, an age-group in which hair loss is rare.

The majority of women with FPHL scored their shedding at four or above (182 women out of 209).The average shedding score in this group was 4.96. In contrast, only one of the school-aged girls (out of 100) gave a shedding score higher than four. The average score of this younger group was only 2.68, significantly lower than the group with FPHL.

Interestingly, some women with FPHL who denied having increased hair shedding were found to have increased shedding when assessed using the visual scale. These patients may accept excessive hair shedding as normal.

This study demonstrates that the visual hair shedding scale allows delineation between normal and abnormal shedding in women and girls with long hair. Grades 1-4 are considered normal, while grades 5-6 represent abnormal, excessive shedding. As 70% of patients with FPHL have excessive shedding, this scale may facilitate earlier diagnosis and treatment before the condition becomes irreversible.

While the scale has not been validated in women with short or shoulder-length hair, it has been found valuable in assessing response to treatment in all women, regardless of hair length.

Hair shedding in women: how much is too much?
Sinclair R.
Br J Dermatol. 2015 Sep