Harmful algal blooms in the Mar Piccolo: what effect may they have on local mariculture?

More than 70% of the world’s human population lives in the coastal environments and in recent years, population growth and related human activities (agriculture, wastewater treatment plans, urban runoff) have increased nutrient inputs (inorganic fertilizing compounds) in these systems, causing problems to the environment and to humans. 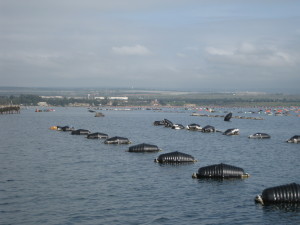 Phytoplankton, which are microscopic algae responsible for the bulk of primary production, respond rapidly to nutrient enrichment, which can have significant effects on phytoplankton composition and dynamics and may lead to the development of blooms dominated by a single species or species group. When these blooms lead to undesirable effects to humans and to the environment, they are defined “harmful algal blooms” (HABs). Harmful are considered the species that reach very high concentrations in water (“the high-biomass producers”) and cause loss of environmental quality and benthic habitat, development of very low levels of oxygen in the sea and consequent mussel deaths. Sometimes, the hyperproliferation of these species can be responsible for a change in the color of the sea, which varies from green to red or brown (according to the involved organisms), and we name usually this events “red tides”. Moreover, harmful species are also the potential producers of toxins, which may affect negatively human health.

The link between anthropogenic nutrient supply and the appearance of HABs has been largely discussed and even if evident relationships have been demonstrated, other chemical-physical and biological factors may modulate the harmful species responses to nutrient loadings. These factors comprise the nutritional pathways, the food web interactions, and other interactions of HABs species with other organisms.

The impact of HABs on public health and mariculture is increasing in the last decades in costal sites. An example is represented by the Mar Piccolo of Taranto (Ionian Sea, Mediterranean), which together with the northern Adriatic Sea covered up to 50% of the Italian mussel production in the 2000-2005 period. HABs have been responsible for massive mussel kills since 1938, but in the last years the problem is worsening and recurrent very low levels of oxygen due to phytoplankton blooms are becoming more frequent in summer. Between 2000 and 2005, the Political Authorities approved the closure of one quarter of the urban wastewaters in Mar Piccolo with the objective of improving water quality, reduce bacterial and algal pollution and defending the mussel consumers’ health. Researches carried out in a period comprised between 1991 to 2014 demonstrated that the closure of the main sewerage outfalls has positive effects on the environment, as it reduced sewage detritus and nutrient loadings by 25% and increased the water transparency, leading to the recovery of some marine plants, considered indicators of good environmental status. Also the phytoplankton composition and dynamics changed, but HABs and anoxia crises occurred also after the urban outfalls closure. About twenty-five harmful species were detected throughout the years; among them twenty-three are potential producers of toxins (e.g. diarrhetic and amnesic shellfish poisonings). Among the high biomass species, a diatom (Ceratoneis closterium) in July 2008 produced a bloom, which was responsible for a heavy reduction (~ 35%) of the total commercial mussel harvest with a valued loss of ~ € 13 million.

These findings suggest that regular monitoring of HABs in the Mar Piccolo must be implemented. Moreover, it will be important to establish the role of different inorganic and organic nutrient pools prior to or during HABs events. On the basis of these researches, efforts will be done to built models and early-warning tools useful for authorities responsible for the safeguard of public health, environmental protection and economic development of the Mar Piccolo.