Heart compression by the liver; a rare surgical disease 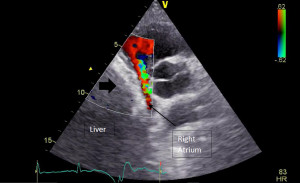 Fig . 1. Preoperative Echocardiography shows compression (Black arrow) of the right atrium by the liver and disturbance of the blood flow “Mosaic colors”

The elevated right half of the diaphragm and the liver  beneath it compressed the heart chamber; specifically the right atrium; which receives the venous return from both upper and lower halves of the body through two large venous channels “the superior and inferior vena cava”. Compression of this chamber leads to impairment of the venous drainage and consequently the patient has presented with dilated venous channels in his neck and on his abdominal and chest wall beside the patient had acute difficulty of breathing and right side chest pain. Several other conditions can present with similar symptoms and signs including myocardial infarction which has characteristic ECG changes and associated with elevated cardiac enzymes. Pericardial tamponade is another condition caused by rapid accumulation of fluid in the pericardial sac “the sac surrounding the heart” leading to cardiac compression and acute breathing difficulty with dilated venous channels in the neck. Echocardiography differentiates pericardial tamponade from external cardiac compression. (Fig. 1) Computed chest tomography provided the accurate diagnosis of the condition and confirmed elevation of the diaphragm and heart  compression by the elevated liver. The decision was to relieve this mechanical compression of the heart surgically. The surgical approach was through incision in the 8th intercostal space which allows us to operate comfortably on the diaphragm and in order to reduce the diaphragm to its normal position, diaphragmatic plication by several vertical and horizontal sutures was done. Biopsy of the diaphragm was performed at time of surgery which shows scarce muscle fibers of the diaphragm and abundant fibrous tissue and this confirms the diagnosis of congenital diaphragmatic eventration. Because of the prolonged compression of the lower lobe of the lung by the elevated diaphragm, those patients tend to have recurrent lower lobe collapse postoperatively. The lower lobe required repeated and intensive physiotherapy to expand and fill the space that was occupied by the elevated diaphragm. The patients had uneventful recovery, the diaphragm was reduced to its normal position and heart compression was relieved with dramatic improvement of his preoperative symptoms.