Heavy metals are one of the most common pollutants worldwide, being a serious hazard to the environment and public health. These metals are usually removed from polluted waters by physicochemical methods that can have substantial costs, low efficiency for contaminants present in low concentrations, and generally do not allow to recover the metal. The use of microorganisms or their isolated extracellular polymeric substances (EPS) can overcome these limitations. Cyanobacteria can release polysaccharides (RPS) with anionic nature and other interesting features to the culture medium, making these polymers promising for biotechnological applications. Metal removal systems based on these organisms and/or their RPS can remove metals via an active uptake by the cells (bioaccumulation) and/or a passive biosorption of the cations to the cell surface or the released polysaccharides (usually by ion exchange).

Cyanothece sp. CCY 0110, a unicellular and marine cyanobacterium previously shown to be a highly-efficient RPS producer, was used to elucidate which culture fraction (living cells/dead cells or isolated RPS) was involved in the removal of copper, lead and cadmium, heavy metals commonly found in polluted waters. In all cases, the RPS was the key player in metal removal, revealing that bioremediation is mainly occurring by biosorption. Some copper was also accumulated inside the cells since this is an essential metal for cell metabolism. 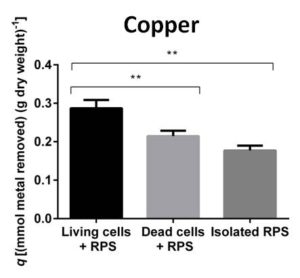 However, the cells showed signs of metal toxicity as previously described. In general, pre-treating the RPS with an acid or a basic solution successfully increased the amount of metal removed. Even when all the metals were present simultaneously, as commonly found in waste waters, both pretreatments increased metal removal, in particular for copper. Moreover, our results suggest that ion exchange was not the main mechanism involved in biosorption. In addition, the sequential addition of copper and cadmium to the RPS revealed that the binding sites for these metals are not the same, and that conformational changes can occur in the polymer when the first metal is attached allowing the second metal to bind more efficiently. The RPS functional groups found to be involved in the metal-binding process were mainly the carboxylic and the hydroxyl.

The knowledge generated by this study will contribute to the implementation of heavy metal removal systems based on low cost and eco-friendly options, like EPS-producing cyanobacteria or their isolated polymers.