Helpful tool for the characterization of cancer

Follicular lymphoma is a sort of blood cancer and among the most frequent subtypes of indolent (painless) lymphomas. Most patients are diagnosed very late, when the illness is in an advanced stage. The origins of the tumor are B-lymphocytes, which normally produce antibodies to defend our body from antigens. Changes in the genetic programme of these cells lead to a survival advantage and subsequently uncontrolled proliferation. Standard therapy suitable for all patients still does not exist.

As opposed to this, follicular hyperplasia is the most common type of reactive lymphadenopathy, meaning swollen or enlarged lymph nodes due to infection or autoimmune disease. Despite there are some hints, which can be helpful in the differentiation between follicular hyperplasia and cancer (follicular lymphoma), as for instance age, the patient´s history or histological features, there is still no pathognomonic (significant) histologic characteristic.

To obtain better insight into the differentiation between cancer and hyperplasia, we took advantage of mouse models, which were genetically modified. In detail, genes (genotype), regions of our DNA, encoding RNA, ultimately proteins and are responsible for the observable characteristics or traits (phenotype). In the end, we had mice developing cancer (follicular lymphoma), reactive lymphadenopathy (follicular hyperplasia) and as a control, less cells (hypoplasia) or a normal phenotype.

To distinguish the different appearances of these mice, we used a mid-infrared (MIR) microscopic imaging technique. Infrared is invisible radiant energy, electromagnetic radiation and the wavelengths are longer than those of visible light. It is absorbed or emitted by molecules when they alter their rotational-vibrational movements. It was used to image molecules of interest in tissue sections from mice with different illnesses to obtain the local expression of molecules, without having influence on the integrity of the tissue. With this method we were able to investigate the spatial distribution of proteins and small molecules in tissue sections from organs (spleen) of the different phenotypes, without staining and only minimal sample preparation effort. 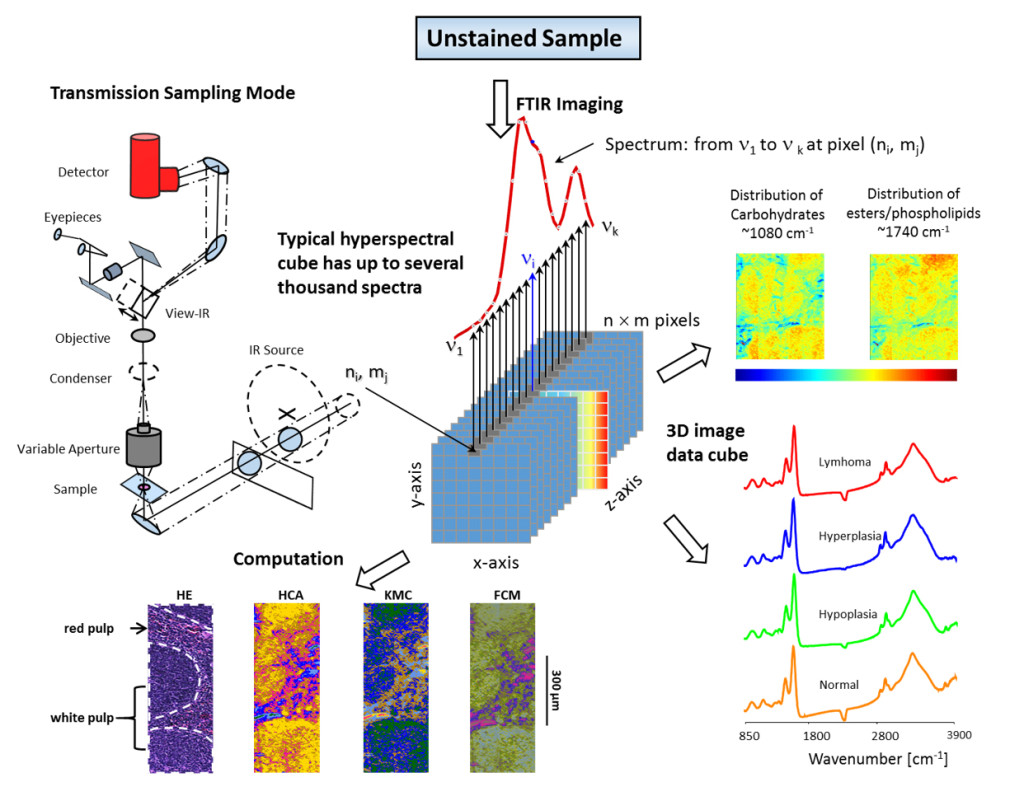 The idea behind is to monitor biochemical changes during tumor development (for instance more DNA, less protein…) due to vibrational excitation of chemical bonds by infrared radiation. The resulting spectral features give insight into biochemical composition of the tissues (molecular fingerprint) due to alterations in the absorption peaks.

We were able to demonstrate, that it is possible to get excellent MIR microscopy imaging results, correlating well with the morphological tissue features derived from HE-staining, hematoxylin eosin, one of the principal stains in histology and mostly used in medical diagnosis. Furthermore, described substance classes such as nucleic acids, esters, phospholipids and carbohydrates could be imaged in a semi-quantitative way in the different phenotypes to get deeper insight in the molecular structure.

In the end, with the help of further special analyses, we could separate the various phenotypes with only one statistical approach and finally differentiate between cancer (follicular lymphoma), reactive lymphadenopathy (follicular hyperplasia), less cells (hypoplasia) and normal tissue.