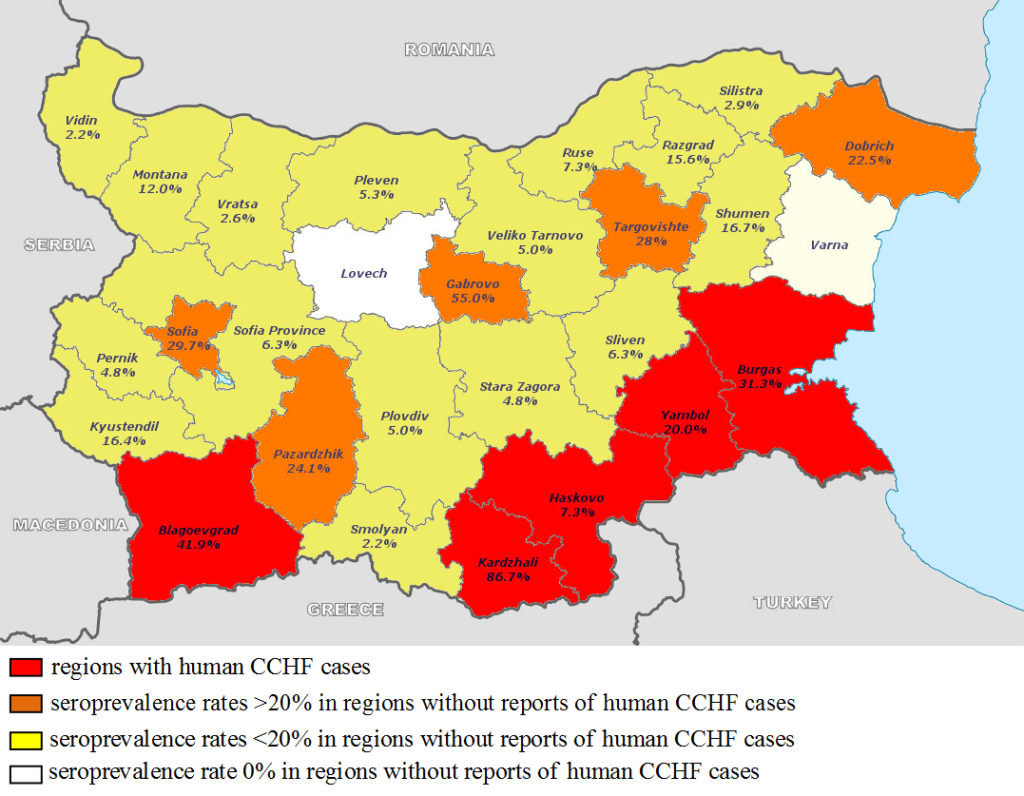 Fig. 1. CCHFV seroprevalence in livestock in all regions in Bulgaria. District specific prevalence rates are indicated in the map.

The highest seroprevalence was detected in the district of Kardzhali, South Bulgaria (86.7%, 95% CI: 73.8%-93.7%), a well-known focus of CCHF in humans. In the other four districts located in South Bulgaria, where human CCHF cases were reported in the last 10 years, seroprevalences were as follows: Blagoevgrad (41.9%; 95% CI: 28.4%-56.7%), Burgas (31.3%, 95% CI: 22.2%-42.1%), Yambol (20%; 95% CI: 11.2%-33.0%) and Haskovo (7.3%; 95 CI: 2.9%-17.3%). Notably, IgG specific antibodies against CCHFV were found in domestic ruminants in all except two Bulgarian districts.  Seroprevalence rate in livestock in districts with no history of CCHF cases was up to 55% (district of Gabrovo) and varied between 22.5% and 29.7% in four other districts. The high seroprevalence rates detected indicate active CCHFV circulation in these regions.  In four additional districts with no history of human cases, the seroprevalence rates ranged between 12% and 16.7%. In the rest 12 districts without human CCHF cases, the rates of CCHFV IgG-positive ruminants were between 2.2% and 7.3%. The mean seroprevalence (18.4%) was relatively high. Similar seroprevalence rates in domestic animals were also reported for other Balkan countries: Greece – 25%, Kosovo – 18.4%, Republic of North Macedonia – 14.6%, while an even higher seroprevalence was found in Turkey (57% and 74%). The analysis of the specific antibodies in numerous regions with no history of human CCHF cases (in 21 of the 28 districts) is of particular interest. It is very unlikely that CCHF cases are not recognized since the disease is well-known for more than 60 years in Bulgaria. More likely it has to be assumed that many CCHF patients are asymptomatic or develop unspecific symptoms. Indeed, the low pathogenic CCHFV lineage Europe 2 has been shown to be much more common in ticks collected from livestock in Bulgaria than the highly pathogenic CCHFV lineage Europe 1. The study showed that 6.3% of Hyalomma marginatum ticks in the endemic regions were infected with CCHFV lineage Europe 1 while 11.8% of Rhipicephalus sanguineus sensu lato ticks were infected with the low pathogenic CCHFV lineage Europe 2. In conclusion, this is the first seroprevalence study on CCHFV specific antibodies in domestic animals covering all districts of Bulgaria. The results show that CCHFV is much wider spread than previously thought based on the known endemic areas. These results suggest frequent CCHF virus infections even in regions without human CCHF cases and an enhanced risk of infection for humans in close contact with the infected livestock.