How and why do onomatopoeias change? A new perspective about the spatial conceptualization

Have you ever tried to read the cartoon strips without the onomatopoeias? It has been shown that they are fundamental for the comprehension of the text and they also can help us to understand comics in a foreign, unknown language. How can we explain their mysterious power?

Onomatopoeia ( old Greek όνοματοποιία; όνομα ‘name’, ποιέω ‘I make’) is a rhetorical figure that represents, through the sounds of verbal languages,

The onomatopoeias are widespread in every ages (old Greek brekekekex koax koax,  kikkobau – kikkobau in Aristophanes’ comic play for the voice of frogs; lat. tux tax  for a blow in Plautus text) and in every kind of languages, from those of Native Americans to the African and Australian languages. The specific issues discussed about onomatopoeias, from the age of the Cratilo of Plato to the experiment of Wolfgang Köhler (1929), centred on takete/maluma, have been always the same: this typology of sign is/or /is not arbitrary  and totally independent of the extra-linguistic universe? It is enough to classify them on the base of the number of sounds for discovering their iconic relevance? If boom ‘deep, hollow sound, explosion’ or hiss ‘to make a sharp sibilant sound, produced by geese and snakes, or angry/scared cats’ cannot be repeated, in other cases the sound is necessarily double (e.g. ha ha, he he, hu hu ‘laughter’) or persistent (lub-dub-lub-dub-lub-dub ‘sound of a beating heart’). This demonstrates that onomatopoeias are not totally arbitrary – just as Saussure considered – and are characterized by a specific connection with some forms of an external world. The main problem is to understand and define what this universe is.

Many researches, aimed to show the hypothetic link between the typologies of sounds, and their isomorphism with a complex system of iconicity factors or with the mouth apparatus,  have failed to achieve satisfactory results. Therefore, we need  to assume a new perspective  such as that we  have illustrated in the 6th International Conference on Spatial Cognition (Rome September 7-11, 2015, at ‘Sapienza University’). 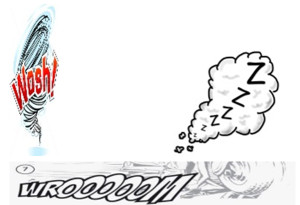 The idea is that the relationship between designatum and disegnatum in the 4th kind of onomatopoeias  (see above) is based on the presence of specific phonemes and their correspondence to Image Schemas. It is well known that the Image Schemas are recurring dynamic patterns of our perceptual interactions and motor programs that give coherence and structure to our experience. Data confirm the general correspondence between specific phoneme clusters and specific Image Schemas. While the plosive phonemes in final positions correlate to SOURCE-PATH-GOAL and to the events in which there is a contact (Fig. 1), the  liquid and trill consonants, and vowels, tend to correlate with PATH (ahhooouuu, drriiin, galopp, vroooarrr: Fig. 2). The base of such correspondence would not be imitative, but symbolic-conceptual and would not be related to predetermined frames, but to a profiling that can always be modified by cultural factors.

– on large and qualitatively different corpora: e.g. in the Gubern-Gasca dictionary (in which we have  507 lemmas and each onomatopoeia is exemplified through an image), 77 onomatopoeias   (79,3% ) of the total  97 of 4th class describe the concept of a SOURCE-PATH-GOAL and are  connected to a plosive sounds at the end;

–  through an experimental verification (conducted by Annarita Guidi): 40 Chinese speakers and 40 Italian speakers were asked to match different kind of pseudo-onomatopoeias with a schematic image. In 77% of the cases,  the stimulus marked by a plosive sound at the end (like in  nund, pook, deeb) was connected to a  Source-Path-Goal Schema and to this profiling.