How birds breathe: Did evolution finally get it right?

Flight and the efficiency of the respiratory system
Powered (active) flight is a defining lifestyle trait of birds. Showing the exacting evolutionary requirements for flight, powered flight has only ever developed in insects, the extinct pterodactyls, birds and bats (Fig. 1). Energetically, the form of locomotion is extremely demanding. A flying budgerigar, e.g., increases its oxygen consumption thirteen times the value at rest. The respiratory system of birds is exceptionally structurally complex and efficient. These properties stem from various structural- and functional adaptations. They comprise: a) large volume of inhaled air; b) sizable hearts which pump large volumes of blood to the lungs and then to the rest of the body; c) short pulmonary circulatory time, i.e., the time blood pumped by the heart to the lung takes to return after it is oxygenated, permitting efficient delivery of oxygen to the tissues; d) in particularly the high altitude flyers, high hemoglobin affinity for oxygen which helps maintain its supply to the brain especially when there is little of it; e) separation of the respiratory system into a gas exchanger (lung) and a ventilator (air sacs); f) presence of novel gas-exchange designs such as crosscurrent system (CCS), countercurrent-like system (CCLS) and the multicapillary serial arterialization system (MCSAS) and; g) noteworthy pulmonary structural adaptations. 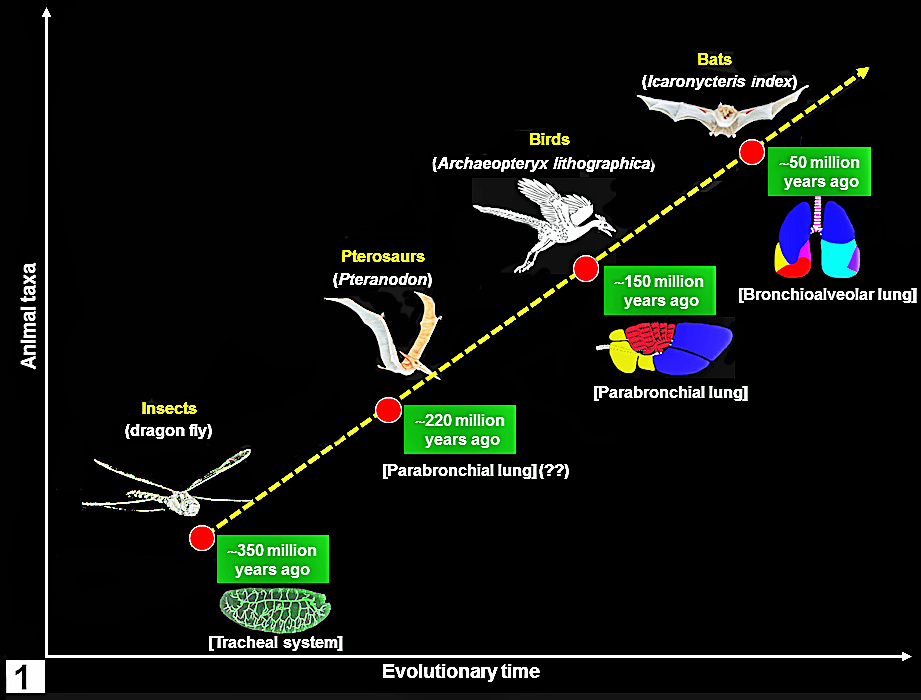 Fig. 1. In the animal kingdom, powered (active) flight has only ever evolved in insects, the now extinct pterodactyls, birds and bats – chronologically in that order. Insects evolved a tracheal system, bats retained the bronchioalveolar (mammalian) lung and the respiratory system of the pterodactyls is reported to have been bird-like (two question marks). Although the avian respiratory system is not a prerequisite for powered flight, among the air breathing vertebrates, birds have a remarkably efficient gas exchanger. The oldest bird is Archaeopteryx lithographica while the oldest bat is Icaronycteris index.

Structure of the respiratory system
The bird’s lungs are small and compact (2A, B – inserts). The primary-, the secondary- and the tertiary bronchi (parabronchi) form complex hoop-like arrangement of airways (Fig. 2B, C – inserts). The air capillaries (ACs) and the blood capillaries (BCs), the respiratory units, occur in the gas exchange tissue (Fig. 2D) where the ACs range in diameter from 3 to 20 µm.

Function of the respiratory system of birds
The direction of the flow of air in the lumen of a parabronchus (Fig. 2D – insert) relative to the inward flow of the deoxygenated blood are essentially perpendicular: the arrangement forms a CCS; in the exchange tissue, blood and air flow in opposite directions, forming a CCLS and; in the exchange tissue of a parabronchus, the ACs and the BCs are arranged one-after-another, forming a MCSAS in which gas exchange occurs by an additive process. 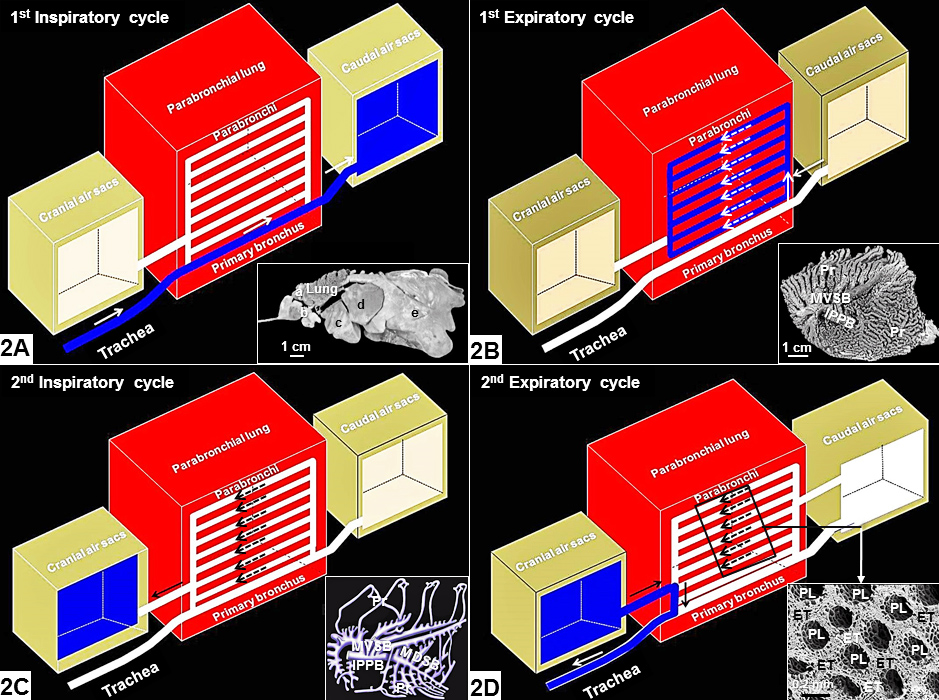 Morphometry of the avian lung
The respiratory system of birds forms as much as one-third of the volume of that of the body. With ~80% of it located in the BCs, the volume of blood in the bird lung forms as much as 36% of the lung volume. The respiratory surface area in a bird lung is ~15% greater than that of the lung of a mammal of equivalent body mass. The thickness of the blood-gas barrier in the lungs of small energetic birds is ~0.1 microns.