How does presenting ourselves on Facebook influence our sense of self?

Social media have become an integral part of many people’s lives, but what influence would they bring?

One area in which social media such as Facebook may have an impact is users’ sense of self. Facebook allows users to consider the image they would like to share and then broadcast the image through posts to hundreds of audience members (i.e., Facebook Friends). In this self-presentation process, users decide what information to share and what to conceal. It urges users to reflect upon themselves, considering questions such as “What does this post say about me? Is that the image I want to deliver?” Facebook self-presentation not only activates self-reflection; it also invites feedback from the audience (e.g., comments and “likes”). It leads us to the question: How do audience feedback and self-reflection in relation to Facebook self-presentation associate with users’ self-esteem and self-concept? More specifically, do users feel better about themselves and get a clearer idea of who they are after presenting their images on Facebook, getting feedback from others and reflecting upon themselves? 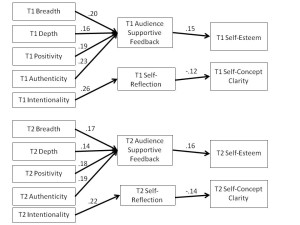 These questions are particularly relevant to college freshmen, who are transitioning into the new college environment, for two reasons. First, Facebook use rate is high among adolescents and young adults, and college freshmen rely on social media as such to stay connected with friends back home and to make new connections on campus. Second, life transitions impose challenges to one’s sense of self. Leaving the safety net, encountering tasks they are unfamiliar with, and being surrounded by strange faces in the new setting, college freshmen can question their self-worth, feel anonymous, and experience a sense of identity loss. Would Facebook use help to boost freshmen’s self-esteem and clarify their identity when they go through these challenges?

To address the questions, we conducted a survey study in which we explored how various dimensions of Facebook self-presentation were related to freshmen’s level of self-reflection and perceived supportive feedback from Facebook audience, which in turn contributed to their self-esteem and self-concept clarity. We surveyed 218 freshmen who were Facebook users (Mage = 18; 64% female; 86% White) attending a major Midwestern U.S. university at the beginning of their first semester (T1). The participants responded to questions about their Facebook self-presentation on five dimensions: breadth (how many aspects of the self were revealed), depth (how personal and intimate the information was), positivity (whether the presentation focused on positive or negative aspects of the participant), authenticity (whether the presented image was an accurate and honest reflection of the participant), and intentionality (whether the participant thought carefully before posting on Facebook). 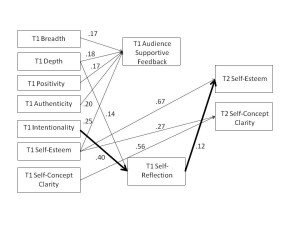 They also reported the amount of positive feedback received on their postings (we focused on this type of feedback because it was the most common form on Facebook), degree of self-reflection, self-esteem, and self-concept clarity. At the end of the semester (T2), 135 students returned for a follow-up survey (67% female; 86% White), in which they responded to the same questions.

We found that at both T1 and T2, broad, deep, positive, and authentic Facebook self-presentation was associated with more perceived support from the audience, which contributed to higher self-esteem contemporaneously, though not longitudinally. Intentional Facebook self-presentation engaged students in self-reflection, which was related to lower self-concept clarity concurrently but higher self-esteem longitudinally. Findings affirm that social media can be instrumental in identity development, although the specific associations vary by how users approach the platform. The study targeted freshmen going through the college transition and thus the findings may not be applicable to other age groups; nevertheless, the results provide preliminary answers to how social media would influence the way users see themselves.

Online Self-Presentation on Facebook and Self Development During the College Transition.
Yang CC, Brown B.
Journal of Youth and Adolescence. 2015 Nov