How localizable are language brain areas?

The interest in understanding how language is “localized” in the brain has existed for centuries. During the late 19th and early 20th century, the brain’s language area was thought to correspond to the region around the Sylvian fissure of the left hemisphere, including segments of the frontal, temporal and parietal lobes. It was further assumed that there was a frontal language production area, known as Broca’s area, and a language understanding area –or Wernicke’s area– located in the temporal lobe. This marked the conclusion of the clinical observations of people suffering diverse brain pathologies associated with language disturbances (aphasias). Different types of language disorders were reported in cases with brain damage, depending upon the specific location of the damage. Consequently it was thought that specific brain areas are involved in processing particular aspects of language. 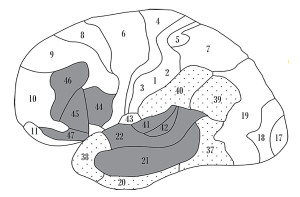 Furthermore during the late 20th century, functional neuroimaging, such as the functional Magnetic Resonance Imaging (fMRI) studies, demonstrated the participation of other brain regions (including subcortical areas) in language functions. Regardless of the diversity of methodological limitations that can be pointed out through the use of these neuroimaging techniques, it became clear that language is associated with brain networks or circuits, rather than with specific brain areas. Brain areas co-activated when performing a particular task suggest they belong to a common specific network or brain circuit. Thus, it is assumed that if two or more areas are activated within the same task, they are functionally connected and, consequently, participate in a single network. Currently, there are several techniques that potentially demonstrate brain circuitries or networks. These techniques are grouped under the term “brain connectivity.” We used a specific approach known as meta-analytic connectivity modeling or MACM.

In this study, some brain areas potentially involved in language reception and understanding (lexical-semantic system), as well as areas involved in language production, (grammatical system) were analyzed. Seven different meta-analytic studies of fMRI activity during the performance of different language tasks were carried out.

In conclusion, there were two different language systems in the brain: (a) a language reception/understanding system (or lexical-semantic system), including a “core Wernicke’s area” involved in word recognition; and a fringe or peripheral area (“extended Wernicke’s area”) involved in language associations (associating words with other information); and (b) a language production system involved in speaking and grammar (“Broca’s complex”), including not only some frontal cortical areas but also extending subcortically toward the basal ganglia and the thalamus (Fig. 1).

Moreover, the insula (a portion of the cerebral cortex beneath the temporal lobe) represents a core area in language processing and it is related, not just with language production functions, but also with language understanding processing. It was consequently proposed that the insula is a core hub for language. Its strategic location between the anterior and posterior language areas would be crucial for a language coordinating function.