How the seasnake lost its bands

Across Europe, the Industrial Revolution of the early 1800s blackened the trees with soot. That shift in color exerted strong evolutionary pressure on many species of insects that were camouflaged against natural tree-trunks but very obvious (to predatory birds, for example) against the black background. Studies of the rapid shift to black color in one of those insects – the Peppered Moth – provided some of the first clear evidence of evolutionary change. Researchers at the University of New Caledonia, University de la Rochelle and University of Sydney have found a similar process – animals evolving darker colors in polluted areas – but in a very different kind of animal and a very different place. 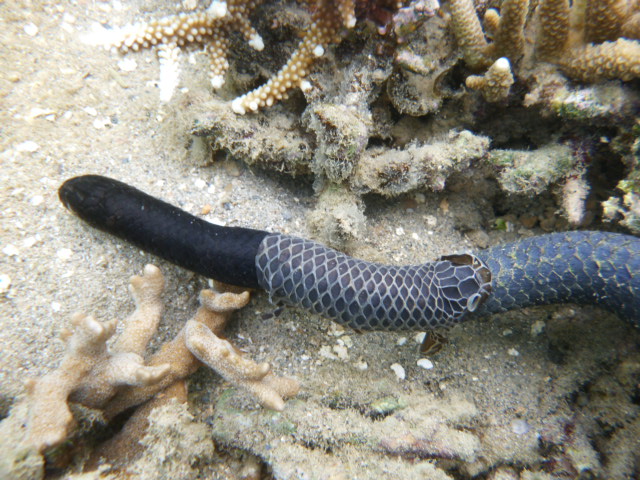 Fig. 1. A black (melanic) individual of the Turtle-headed Seasnake shedding its skin, and thus ridding its body of trace-element pollutants. Photograph by Claire Goiran.

Turtle-headed Seasnakes (Emydocephalus annulatus) are brightly banded in black and white across most of their range in the IndoPacific. These small seasnakes live on coral reefs, and forage in shallow water for the eggs of small fishes. However, some populations consist mostly of jet-black (melanic) individuals instead of black-and-white ringed animals. The proportion of jet-black snakes is highest in sites exposed to pollution from human activities. The reason for that link – classical “industrial melanism”, just like the insects of Europe a hundred years earlier – seems to be that black skin binds trace-element pollutants. When the snake sheds its skin as it grows, many pollutants are thus expelled from the body.

Pigeons in polluted European cities also tend to be black, and can excrete trace-element pollutants with their feathers in the same way as seasnakes do through their scales. So although the benefit of black color to an animal in a polluted area can differ, the end result is the same: we see more black animals in polluted areas.