If you need a reason to become a furry pet lover, how about their ability to help protect kids from allergies and obesity?

For decades, we have known that children growing up with furry pets have lower rates of asthma than those who do not, an observation attributed to the hygiene hypothesis. As our knowledge of the human microbiome has expanded, so has this hypothesis. Limited exposure to environmental microbes in an overly hygienic lifestyle has significant potential to alter beneficial colonization of the infant gut and disrupt immune system development towards an allergic phenotype. Newer studies extend this microbial benefit to preventing overweight. In 2013, a pilot study of 24 infants by Dr. Anita Kozyrskyj’s team showed that postnatal pet exposure increases the number of beneficial microbes in the infant gut. Four years later, her study of 746 infants from the Canadian Healthy Infant Longitudinal Development Study (CHILD) birth cohort also evaluated the impact of maternal pet exposure during pregnancy on infant gut microbiota, and whether this depended on how infants were born. This new study, led by first author and postdoctoral fellow, Hein Min Tun, advanced understanding of the household pet connection in several ways. 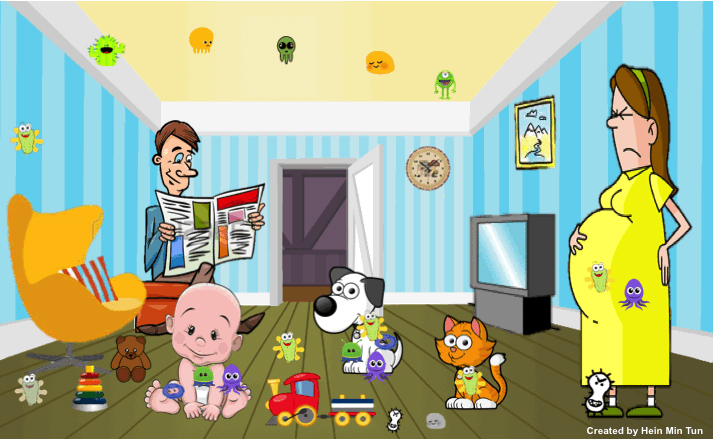 First, in infants born vaginally or by C-section, pet exposure during pregnancy or in combination with postnatal exposure 3 months after birth, increased the amounts of 2 bacteria normally found on dogs and cats. One was Ruminococcus, linked to lower rates of allergies in children. The other was a relatively unknown microbe, Oscillospira, reported to promote leanness.

A second noteworthy finding with prenatal pet exposure was a reduction in fecal levels of Streptococcus among infants whose mothers received antibiotics during birth to prevent vaginal GBS (group B Streptococcus) transmission. Further, in the absence of pets, infants born to GBS-positive mothers had higher amounts of streptococci in their gut than infants born to GBS-negative mothers.

And how could a furry pet favourably influence the composition of gut microbes in infants to promote health? First, let us consider what normally happens during infancy. Our gut microbial ecosystem matures from a few microbes after birth to an adult-like pattern 1 year later. The infant’s immune system co-evolves with the gut microbial ecosystem, whereby gut microbes train immune cells to recognize what is friend and what is foe in the intestine. This interaction is required for a healthy immune system, and changes in this process lead to allergic disease and obesity in later life. Not surprisingly, pets can directly transfer beneficial microbes to infants, or indirectly by leaving microbes on indoor surfaces or in dust. During pregnancy too, pet exposure may influence the composition of the mother’s vaginal or skin microbes, changes which can be passed on during birth, even during a C-section. Knowing that the microbial inoculation of the newborn gut very much depends on whether the infant is born vaginally or by C-section, we speculated that the influence of pet exposure would also vary in this way. As explained above, we found common changes to gut microbes with pet exposure across all birth scenarios but some changes were specific to emergency C-section or vaginal birth to a mother treated for GBS.

The concept of a “dog intervention” during pregnancy as a preventive measure for allergies and obesity is not too far-fetched but definitive studies are required to provide evidence for this health benefit. Minimally, our results could provide reassurance that we shouldn’t be concerned about having a dog or cat around the house when a woman is pregnant. Pets have always been our best friends and they appear to be good for our babies too.