Insights into the molecular basis of posterior polymorphous corneal dystrophy

Posterior polymorphous corneal dystrophy (PPCD) is a rare autosomal-dominant disease affecting the innermost part of the cornea, termed the endothelium. This monolayer of cells maintains corneal transparency by regulating its hydration. Human corneal endothelial cells do not normally divide after birth. It is well established that abnormal proliferation due to loss of cell cycle regulation is a feature of PPCD, however, the mechanism responsible for this disease-related process are not yet  understood. 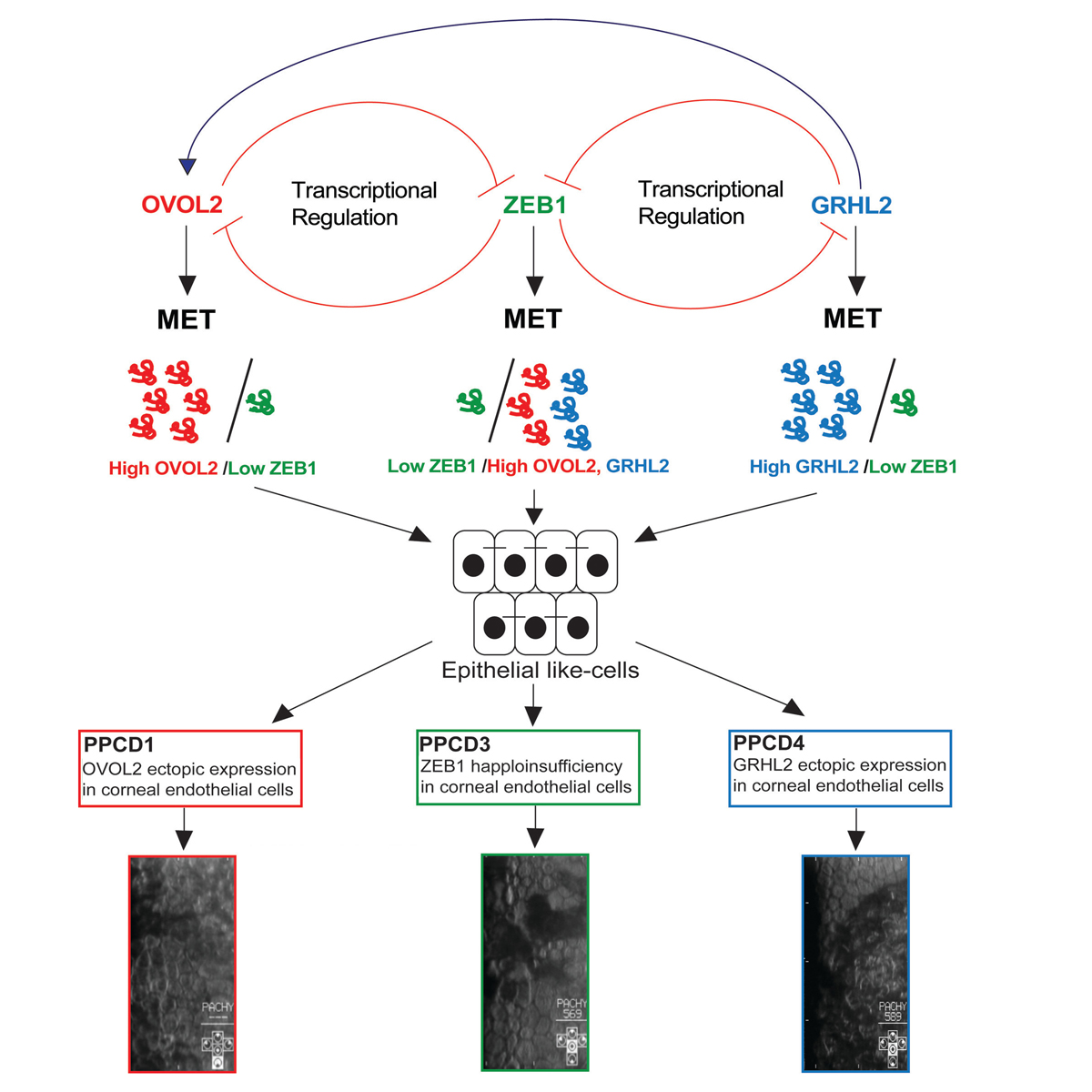 We studied a large Czech family, comprising >36 affected PPCD individuals, spanning 9 generations dating back to the year 1775.  All affected descendants were identified to share a very small part of chromosome 8. Using genome sequencing we identified a unique variant (c.20+544G>T) within intron 1 of the GRHL2 gene. Targeted screening in individuals from unrelated PPCD families led to the discovery of two additional unique mutations in non-coding region of GRHL2.

In vitro experiments showed that the identified regulatory variants induce increased expression of GRHL2. Furthermore, immunohistochemical staining demonstrated that corneal endothelial tissue excised from affected individuals inappropriately expressed GRHL2 as well as a range of epithelial markers. Our experiments indicated that the cells had transitioned from an endothelial to an epithelial-like cell type.

PPCD is genetically heterogeneous; we have previously shown that some PPCD patients carry regulatory mutations in the promoter of OVOL2. Haploinsufficiency of ZEB1 is also a common cause of the disease. This study provides new insights into the pathophysiology of PPCD and highlights that all three established PPCD-associated genes (GRHL2, OVOL2 and ZEB1) are transcription factors that govern epithelial to mesenchymal transition/mesenchymal to epithelial transition (EMT/MET). Dysregulated expression of these transcription factors and the consequential deregulated cell state appears to be a convergent disease mechanism leading to dysfunction of the endothelial barrier and the development of PPCD.

Our discovery was facilitated by genome sequencing enabling us to interrogate the non-coding portion of the human genome.

Unravelling the pathophysiology of PPCD has scientific relevance also in addition to directly impacting upon the clinical care of affected individuals and their families by providing accurate molecular diagnosis and enhanced predictions of disease progression. Obtaining a clearer understanding of pathogenic mechanisms involved in PPCD also opens up opportunities for identifying targeted therapies, for which the cornea an ideally accessible tissue. In case of PPCD caused by GRHL2 and OVOL2 mutations switching off inappropriately expressed genes can be now considered as a potential therapeutic strategy.