Is it possible to operate multiple times endoscopically a person with incisional hernia?

An Incisional Hernia is a hernia that occurs through a previously made incision in the abdominal wall, in the scar left from a previous surgical operation. The first time that an incisional hernia was treated with minimally invasive technique was in 1990. Then both the techniques that the materials have evolved with excellent results until today. The case told here is of a 65 year old male obese patient with history of multiple abdominal surgery, that underwent laparoscopic repair of a incisional hernia in the region of the abdomen called “hypogastrium” (below the navel, centrally). 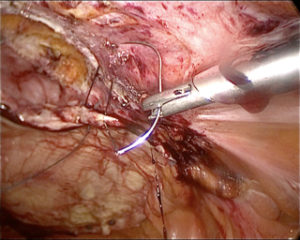 The repair of hernia was carried out with primary closure of the wall defect with endoscopic stiches before the placement of a mesh. The use a mesh (or prosthesis) to cover the defect created by the hernia is more effective than closing the gap with only the stiches. The insertion to the inside of the abdominal cavity of the mesh takes place through a trocar, rolling it on itself. The main feature of modern mesh for endoscopic use, is to have two different surfaces: a surface with polypropylene, a material that will create inflammation and fibrosis of the tissues with which it will go into contact, and a surface with PTFE (Polytetrafluoroethylene: a synthetic fluoropolymer of tetrafluoroethylene) that in contact with the viscera should otherwise not create adhesions.

Unfortunately, after an 8-month follow-up period a recurrence hernia near the navel was diagnosed and the patient re-operated by laparoscopy. The choice to operate the patient once again endoscopically, has been difficult for the surgeon for two reasons. The first reason was that generally when the minimally invasive technique fails, especially in complicated cases of this type, we re-operate with the open traditional technique (more invasive and traumatic for the patient). 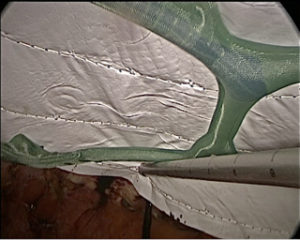 The second one was the perplexity of placing a larger prosthesis on a prosthesis already of that type, always endoscopically. During endoscopic operation the new defect between old mesh and abdominal wall was seen and closed with endoscopic non absorbable stitches (Fig. 1). Afterwards, a new bigger intraperitoneal dual mesh prosthesis was placed to cover the whole compromised abdominal wall (Fig. 2). No early either late complications were diagnosed. Thanks to the minimally invasive technique with only three small incisions in the skin, the discharge is occurred 2 days after and the recovery to normal daily activities has been rapid. After one year of follow-up the patient remains free of recurrence and enjoys good health.

The use of a second bigger mesh during a mini-invasive endoscopic approach of a recurrent incisional hernia, already treated by laparoscopy, was appeared to be safe and effective.