Is the fibrosis a key factor in the management of HCV infection?

The advent of the new direct-acting antivirals (DAAs) for hepatitis C virus (HCV) has increased enormously the sustained virological response (SVR) rates over 95% in almost all sceneries with an excellent safety profile, even in advanced stages of fibrosis and cirrhosis.  However, the main goal is to increase survival and quality of life by modifying the natural history of the infection,interrupting the sequence of fibrosis > cirrhosis > hepatocellular carcinoma (HCC) beyond eradication of the virus.

Liver fibrosis is a key predictive factor for advanced disease. Its progression is common in hepatitis C and both host and viral factors influence its natural history. Fibrosis progression is also influenced by exogenous factors, such as human immunodeficiency virus or hepatitis B virus coinfection, alcohol consumption and metabolic derangement like non-alcoholic fatty liver disease (Fig. 1). 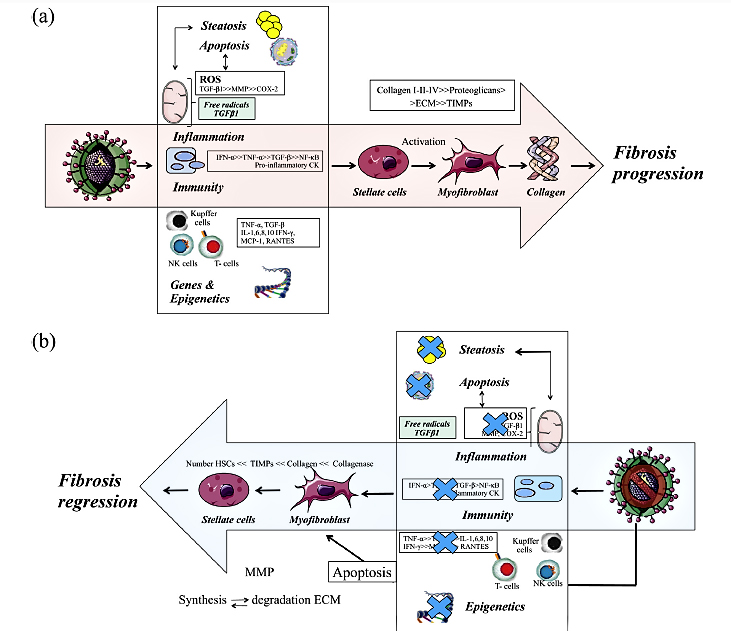 Fig. 1. Mechanism of HCV-associated liver fibrosis. A) HCV-fibrosis progression: The hepatic injury promotes the activation of immunity and inflammatory systems being the progression of fibrosis mediated by signaling molecules. HCV develops steatosis; promoter of fibrosis and several genetics factors have been described as risk factor for progressive fibrosis. Cytokine production together the formation of reactive oxygen species (ROS) and all the risk factors previously cited, activate stellate cells inducing their transformation into myofibroblasts. Myofibroblasts produce large amounts of collagen and slow matrix degradation, leading to tissue fibrosis. B) HCV-fibrosis regression: Viral clearance results in fibrosis improvement. Virus elimination by DAA drugs does not activate inflammation, steatosis and fibrogenesis pathways. Myofibroblasts are inactivated or even eliminate by apoptosis. Manipulating matrix degradation or enhancing HSCs apoptosis might be expected to reduce fibrosis and promote a return to normal liver architecture and function.

Liver biopsy is the reference standard used to determine liver fibrosis, However, liver biopsy is an invasive method with potential complications. In practical clinical, non-invasive methods have replaced to liver biopsy, although they have good correlation in determining the presence of advanced fibrosis,  these are suboptimal when defining intermediate stages. The most widely direct method used is Transient Elastography (TE) (Fibroscan®).

Fibrosis regression after SVR with IFN-based therapies is associated with a lower risk of progression disease. However, the advanced fibrosis is a negative predictive factor for SVR with these therapies. A meta-analysis including more than 1000 patients using IFN versus PEG-IFN, demonstrated that those that achieved SVR more often showed fibrosis regression (61%) and in patients with cirrhosis there was cirrhosis regression in 33% but none had complete resolution.

In the DAAs era, Haseltine et al. found telaprevir-based therapy produced a significant improvement in all non-invasive biomarkers tested, as well as in TE after achieving the SVR. Similar results have been found with sofosbuvir-based therapies. Crissien et al. demonstrated that most patients (58.6%) with advanced fibrosis or cirrhosis had improved TE scores after a median follow up of 2.5 years.

The eradication of the virus improves the overall prognosis of patients with hepatitis C, decreasing all-cause mortality.  Those patients achieving SVR showed a better quality of life and a lower health cost.  In the IFN-based era, a recent meta-analysis including more than 33000 patients found a dramatically decreased mortality in those who achieve SVR. Despite the survival being lower in patients with cirrhosis, it was significantly higher in those with SVR compared with non-SVR. Another, meta-analysis with more than 25 000 and followed up between 3 and 8 years found an overall decreased risk of developing HCC after SVR.

In the DDAs era, some studies found an improvement in hepatic function and MELD score in patients after SVR. Furthermore, a decrease in portal pressure. Mandofer et al. found that the  hepatic venous pressure gradient (HVPG) significantly decreased regarding the basal value, although the decrease was less marked in patients with Child-Pugh B.

On the other hand, the HCC risk after SVR with DAAs is unknown. Two studies have associated SVR after DAAs therapy with HCC occurrence and another has shown negative results. Both studies should be interpreted with caution because of small cohorts and the short follow up.

Nevertheless, patients with cirrhosis after SVR should be included in surveillance programmes for cirrhosis complications and, especially, HCC risk. In this setting, prospective studies are needed to determine the real risk of HCC occurrence and recurrence and the liver- and non-liver-related mortality after viral eradication. Guidelines do not recommend use non-invasive tests in the management of post-treatment follow up.