„Kill-ators” – fighting cancer with a claw

According to the WHO Cancer Report, cancer is the second most frequent cause of death in developed countries. In 2012 approximately 14 Mio people were diagnosed worldwide and more than 8 Mio people died from cancer. Despite the continuous development of high numbers of diverse anticancer drugs, according to estimations, these numbers will increase further within the next two decades. 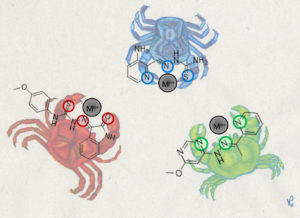 Fig. 1. Chelators can bind metal ions (Mn+) with donor atoms (marked with circles), reminiscent of the claws of a crab. Different donor atom sets are illustrated in different colours: ONS in red for the compound NSC73306, NNS in blue for Triapine and NNN in green for VP035.

How come, scientists have still not found an efficient cure for this deadly disease?

In many cases, treatment fails due to the development of resistance. Resistance can be mediated by diverse mechanisms. One of these mechanisms is the reduced accumulation of the anticancer agents. In most cases drug resistance is developed not only against a single anticancer agent, but against several structurally and mechanistically unrelated drugs. This phenomenon is called multidrug resistance (MDR). Therefore, there is an urgent need for new therapies against MDR cancer.

On the cellular level MDR can be mediated by energy dependent efflux pumps that are present at the boundaries of cells and actively keep the intracellular concentrations of drugs below a cell-killing threshold. The most well studied transport protein is P-glycoprotein (P-gp), which is also a well-accepted biomarker of cancer drug-resistance. A promising strategy to fight P-gp mediated MDR is to develop compounds that selectively kill the resistant cancer cells. Several compounds that were found to be toxic – or paradoxically even more toxic – to MDR cancer cells are chelators. Chelators are ligands that bind metal ions with multiple donor atoms, forming strong complexes. The term “chelator” is derived from the Greek word “chele”, meaning the claw of a crab. In this analogy, the chelating ligand holds the metal ion with the donor atoms like a lobster would hold its prey tightly with its claws (Fig. 1).

The three chelators that are shown in Figure 1 bind metal ions with different donor atom sets.

MDR cells were not resistant against the newly developed compounds (Fig. 2a). Interestingly, analysis of our data suggests that NNS and NNN donor chelators show a higher anticancer toxicity compared to ONS derivatives in a general comparison (Fig. 2a, b), but also in a pairwise comparison, in which the respective donor atom set is the only different variable between two structures (Fig. 2c). We could confirm this trend on larger compound sets in a publically available database.

Our data suggest that fighting MDR cancer with “kill-ators” is a promising strategy.