The concept of the Sun Protection Factor (SPF) was popularised by the Austrian scientist Franz Greiter in the 1970s and subsequently adopted by many regulatory authorities and the cosmetic and pharmaceutical industries as a measure of the protection provided by topical sunscreens against sunburn.

There is often a perception, supported by observational evidence, that topical sunscreens do not provide the degree of protection in natural sunlight that might be expected from the labelled SPF (Fig 1).

This is partly accounted by variations in application thickness and uniformity of spreading coupled with removal during the exposure period due to factors such as sweating and rubbing. Another factor that can contribute to this mismatch between expected and delivered protection is the difference between the spectral emission of UV solar simulators that are used in the laboratory determination of SPF and the spectral power of terrestrial sunlight.

A UV solar simulator (UV-SS) is a high-intensity xenon arc lamp used in conjunction with an optical filter to remove visible light and so allow much higher intensities in the UV waveband compared with natural sunlight, thus avoiding the pain associated with high intensity visible light. Another filter that shapes the spectrum at the short wavelength end to the solar spectrum is also incorporated, the reason being is that wavelengths in the UVB region (290-320 nm) are the most effective at producing sunburn.

The spectral output of a UV-SS is compared with summer sunlight in Figure 2, where we see that, unlike sunlight, the spectral output of the UV solar simulator falls rapidly at wavelengths beyond 370 nm and emits negligible radiation in the visible region beyond 400 nm. The spectral intensity of the UV-SS is much greater in the UV region than is sunlight, as reflected by the scaling on the respective y-axes, resulting in a typical exposure time of about 2 minutes to produce a sunburn reaction on white skin compared with about 20-25 minutes in natural sunlight. 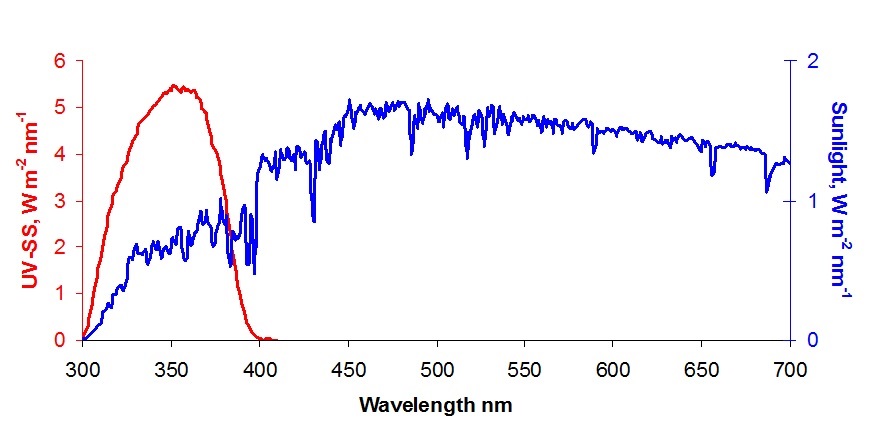 This difference in spectral output between the UV-SS and natural sunlight leads to lower protection in sunlight since visible light, which contributes a small amount towards the sunburn reaction, is absent in the UV-SS but present to a large degree in sunlight. For example, a modern broad-spectrum sunscreen with a labelled SPF of 30 determined  in the laboratory is estimated to produce only 15-fold protection in sunlight. In fact, the mismatch between laboratory determination of SPF using a UV-SS and that expected in natural sunlight increases as the SPF increases such that for products labelled SPF50+, it is not possible to achieve a protection outdoors of more than 25-fold.

The study demonstrated that labelled SPFs determined in the laboratory using a UV-SS do not reflect the magnitude of protection expected in sunlight and that the interpretation of the SPF, often found in beauty and other magazines, that it can be thought of as how much longer skin covered with sunscreen takes to burn compared with unprotected skin, can no longer be sustained.