Lactated Ringer’s solution as “a solution” to reperfusion injury 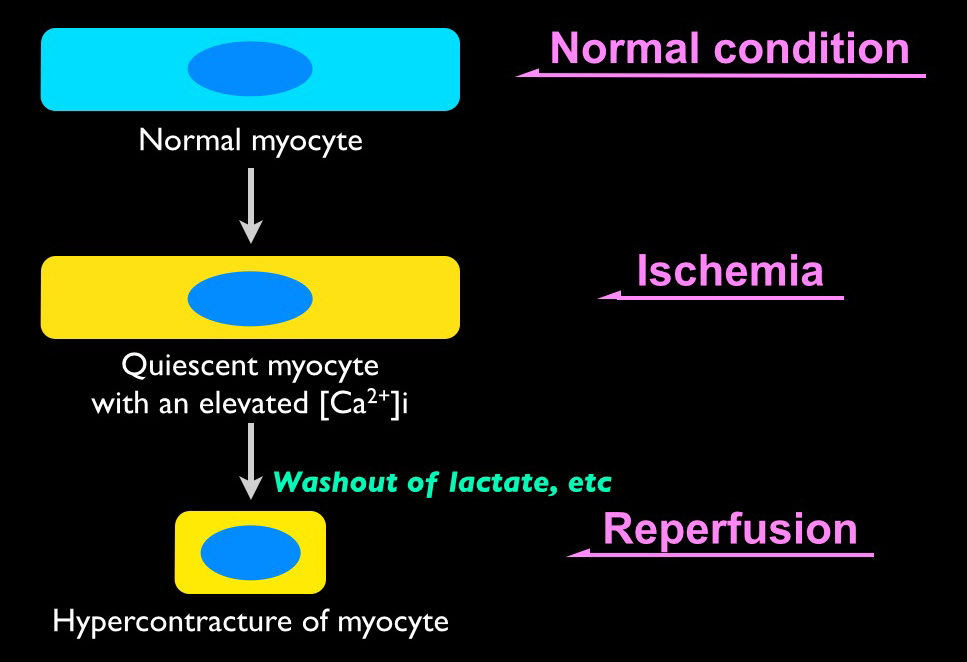 PCLeB is a modified postconditioning protocol comprising intermittent reperfusion and timely coronary injections of lactated Ringer’s solution, aiming to achieve controlled reperfusion with cellular oxygenation and minimal lactate washout from the cells. An ischemic myocardium may cease contraction to save ATP, by accumulating lactate (or producing intracellular acidosis). In contrast, intracellular Ca2+ concentrations ([Ca2+]i) increase at the same time, possibly to maintain myocardial contraction. Consequently, abrupt washout of lactate during reperfusion may induce post-ischemic hypercontraction, followed by hypercontracture development (Fig. 1). Delayed lactate washout may be expected to attenuate rapid contractile force recovery immediately after reperfusion, and could prevent hypercontracture. In other words, we employed lactate as an inherent contractile activity blocker, aiming to prevent rapid contractile force recovery immediately after reperfusion, which otherwise may result in hypercontracture development.

In our protocol, the duration of each brief reperfusion is prolonged in a stepwise manner, from 10 s to 60 s. Lactated Ringer’s solution (20–30 mL) containing 28 mM lactate is injected directly into the culprit coronary artery at the end of each brief reperfusion, and the balloon is quickly inflated at the site of the lesion, trapping the lactate inside the ischemic myocardium. Each brief ischemic period lasts 60 s. After 7 cycles of balloon inflation and deflation, full reperfusion is performed, followed by stenting, thus completing the percutaneous coronary intervention.

We have reported that PCLeB induced augmented microcirculation recovery in patients with STEMI, as indicated by a consistently low corrected thrombolysis in myocardial infarction (TIMI) frame count (20.1 ± 10.1, n = 55), which is even smaller than the normal value of 21. This augmented microcirculation recovery may indicate that microvascular obstruction was attenuated, implying that the strong compressive force was not generated by the development of hypercontracture. This may guarantee that our approach works.

We have reported that PCLeB led to zero in-hospital mortality, with no overt heart failure on discharge in 55 consecutive STEMI patients. None of the patients required continued oral diuretic or inotropic therapy on discharge. This was true even for patients in whom pulmonary congestion was observed on admission, requiring temporary use of a diuretic during the early admission period. Besides these, we have also reported that PCLeB induced lower levels of early inflammation in patients with STEMI. Given these results, the long-term outcomes of STEMI patients treated with PCLeB are expected to improve. We believe that PCLeB may be a promising approach for preventing reperfusion injury in STEMI patients undergoing reperfusion therapy.