Less may be more in catheter ablation of persistent atrial fibrillation

Atrial fibrillation (AF) is the most prevalent heart rhythm disorder worldwide; at present, it affects more than 33 million subjects globally and it is expected that its prevalence will double over the next 50 years. The condition is characterized by a highly irregular, and often rapid, heart beat that prevents the heart from adequately supplying the body’s organs with oxygenated blood. AF may occur in “bouts” lasting no more than 7 days (paroxysmal AF), but it may also persist for more than 7 days (persistent AF) or even for more than a year (long-standing persistent AF). Symptomatic patients generally complain of fatigue, weakness, shortness of breath, and the irregular heart beat perceived as unpleasant and frightening. Heart failure and stroke are among the most devastating consequences of atrial fibrillation. 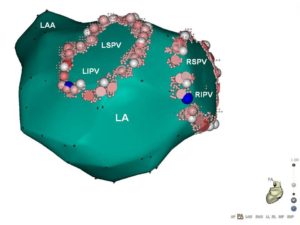 Fig. 1. Electroanatomical map of the left atrium (LA), viewed from the back of the heart, in a patient after successful PVI. Pink/white dots denote sites where radiofrequency current was delivered to create two contiguous lines of lesions, one encircling the antra of the left superior (LSPV) and left inferior pulmonary vein (LIPV) and the other encircling the antra of the right superior (RSPV) and right inferior pulmonary vein (LIPV). Blue dots denote sites where a final delivery of current resulted in electrical isolation of the respective pulmonary vein antra from the surrounding atrial myocardium. LAA = left atrial appendage.

Medical therapy often fails to control the patients’ symptoms. In that situation, patients may undergo an interventional procedure called “catheter ablation”, during which thin and flexible hollow tubes (catheters) are introduced from the groin via the blood vessels into the heart chambers. By way of electrodes at the tip of these catheters the electrical activity of the heart (which gives rise to the heart’s contraction) can be recorded and monitored, but also manipulated, in the “ablation” process, by delivery of radiofrequency current directly to the heart’s musculature (the myocardium). In patients with atrial fibrillation, catheter manipulations are mostly performed in the left atrium, i.e. in the heart chamber receiving blood from the lungs via the pulmonary veins.

A variety of approaches to catheter ablation of AF have been reported, the most frequently used being the electrical isolation of the exit areas (“antra”) of the pulmonary veins from the surrounding left atrial myocardium. Using radiofrequency current, pulmonary vein isolation (PVI) is achieved by heat-induced interruption of electrical conduction in a sequential point-by-point fashion guided along a circumferential course by an electroanatomical mapping system (Fig. 1). Other ablation approaches comprise the creation of lines of conduction block in the left atrium (linear ablation) and the ablation of areas where so-called “complex fractionated atrial electrograms” (CFAEs) are recorded.

Since the optimal approach to catheter ablation of persistent AF is not known, the Alster-Lost-AF trial was conceived to assess whether stand-alone PVI is sufficient in patients with persistent or long-standing persistent AF or whether these patients should better undergo PVI plus additional “substrate modification”, namely CFAE ablation and/or linear ablation. The outcome of either treatment modality was evaluated by comparing the rates out to 1 year of recurrence of any atrial rhythm disorder. In a total of 118 patients (69 with persistent and 49 with long-standing persistent AF) who were assigned by chance to stand-alone PVI (61 patients) or PVI plus substrate modification (57 patients), we observed no statistically significant difference in recurrence rates (46% and 43%, respectively).

It is thus concluded that less ablation, namely the stand-alone PVI approach, is not associated with a poorer long-term outcome than the more elaborate approach of PVI plus substrate modification, which is significantly more time-consuming and associated with significantly higher radiation exposure. The study confirms findings previously reported by other researchers.