One approach to understanding the origin of life has been to construct chemical models of the cell. To represent the primitive cell membrane, researchers use various molecular assemblies. Among them, the “giant vesicle”, a micrometer-sized hollow structure with a bilayer, has been used as a model of the biological cell membrane. Studies to convert oil droplets into vesicles through chemical reactions and self-assembly processes should help us to understand the origin and definition of life. Here, we describe the formation of giant vesicles by using oil droplets as a scaffold.

Fig. 1. Molecular structures of the oil molecule and aldehydes.

First, we will describe the self-reproducing oil droplet system. When we mixed oil molecule 1 with synthesized aldehyde 2 in water, a chemical reaction occurred that produced catalytic imine 3 in about an hour (Fig. 1A). The resulting molecule 3 is incorporated into oil consisting of 1. This incorporation leads to disperse these molecules as oil droplets. Imine 3 also catalyzes the condensation reaction between 1 and 2, which means that 3 functions as an autocatalyst. We observed that the oil droplets generated, increased in size gradually, and that the larger droplets divided into smaller ones automatically, and the smaller ones became larger by taking in oil (Fig. 2). By observing this cycle, we found that the oil droplets repeated their growth-and-division dynamics (self-reproduction) over at least three generations due to the catalytic acceleration and synthesis of 3.

Second, we will describe the formation of vesicles using the self-reproducing oil droplet system. We conducted an experiment to show that the oil droplets change to a giant vesicle upon addition of the synthesized membrane precursor 4, which reacts with 1 to produce vesicular membrane molecule 5 (Fig. 1B). Within 20 hours of adding a solution of 4 to the oil droplet dispersion, we observed many thick-layered giant vesicles and tubular giant vesicles under the microscope (Fig. 2). In the case of a simple mixture of 1, 2, and 4, only a thin-layered giant vesicle was produced; in both cases, vesicles consisted of 5 synthesized from 1 and 4. The difference in thickness of the membrane in the presence of the oil droplet can be explained as follows. The membrane molecule 5 is generated from oil 1 and hydrophilic aldehyde 4 on the interface of the catalytic oil droplets. This resulting molecule 5 covers the surface of the oil droplet and interferes with the additional hydrocondensation reaction between 1 and 4, which suppress the further supply of 5. This is because the unreacted oil molecule 1 remains in the membrane, thereby adding to the thickness of the membrane. 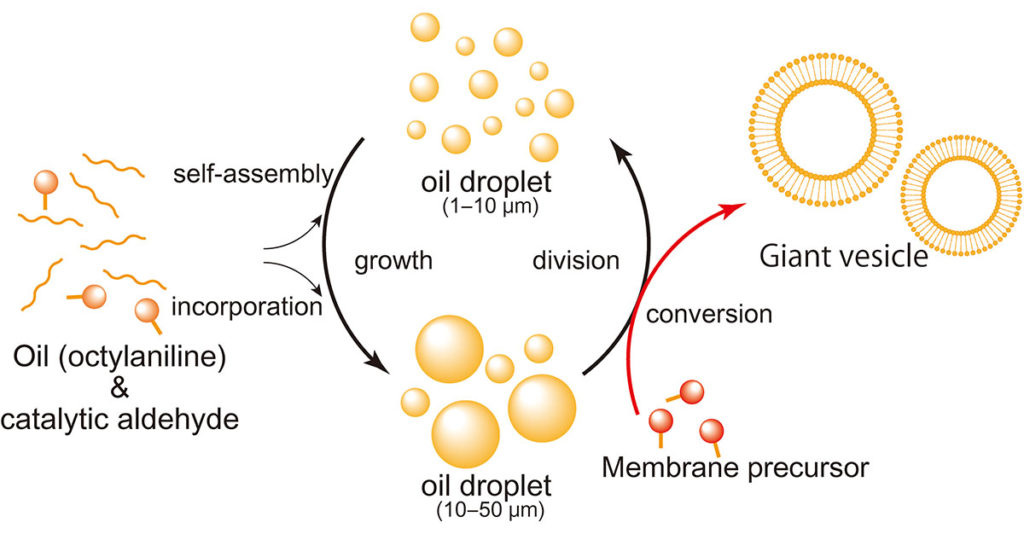 Fig. 2. Scheme of the autocatalytic oil droplet system and the conversion of oil droplets to giant vesicles.

This transformation after a rapid reaction through another system suggests the importance of diverse compartments in the lipid world; the production system of the lipid boundary is the origin of life. In other words, primitive life derived from oil could survive without a robust boundary of lipids (like 5), and could evolve to life with a lipid boundary. These results imply that life evolved in a lipid world.