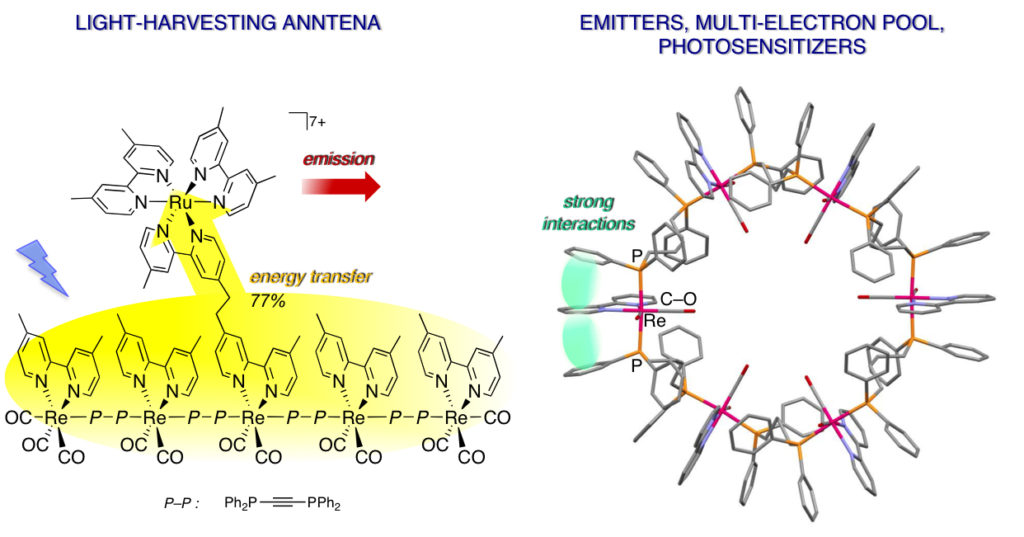 The creation of multinuclear arrays presents an important landmark from photofunctional viewpoint, owing to their light-harvesting or charge-transport abilities across the entire molecule. The merit of synthetic flexibility, that is, the possibility to introduce diverse ligands in a stepwise and highly directional fashion, makes Re(I) complexes suitable building blocks for a new class of larger mutlinuclear assemblies. With this aim, we have developed various synthetic strategies that allow Re(I)-diimine complexes to be repetitively connected into oligomers of a linear or ring shape. The linkage of the Re ion with bidentate bisphosphine ligands. The resulting oligomers display much improved photophysical properties, such as very strong emission, exceedingly long-lived excited states, and also distinctive redox properties in the ground and excited state, compared to the monomeric counterpart.

A series of linear-type Re(I) multinuclear complexes was prepared, in which up to 20 units could be linked. Distinct diimine and bisphosphine ligands together with a number of Re(I) units modulated their properties in a pronounced manner: While an emission quantum yield of 7% and an emission lifetime 0.9 μs was measured for shortest chains. Photoinduced intramolecular energy transfer proceeded from the edge units to the interior. The trinuclear or pentanuclear Re(I) complexes were applied in light-harvesting systems, in which the Re(I) oligomers were tethered with a ruthenium(II) (Ru) trisdiimine complex. Depending on the length of the Re oligomer and on the position of the attached Ru, the efficiency of energy transfer reached up to 89%. This functional system was subsequently incorporated into the cavities of periodic mesoporous biphenylsilica, creating a new class of light-harvesting hybrid material that performs two sequential dissipation-less energy transfer processes: from the excited biphenyl molecules to the Re(I) chain and, finally, its accumulation in the Ru(II) moiety. This domino process mimics the natural photosynthesis, which presents a major conceptual advancement in the field.

Another milestone regarding several properties and applications was achieved for the ring-shaped Re(I) complexes (up to 10 units in the ring). They were prepared by closure of both terminal moieties of the linear Re(I) oligomers, via the same bisphosphine bridges. The substantial influence of the intramolecular interplay between the aromatic ligands within the ring was reflected in their photophysical properties; they showed record emission quantum yields exceeding 60% with very long lifetimes of several μs (up to 7.7). These rings are not only brilliant emitters, but it was found that each Re(I) unit is able to acquire an electron via photochemical reductive quenching from a simple amine as electron donor, allowing it to serve as a multielectron pool. Efficient reductive quenching is a key process in redox catalysis, and this factor, together with a high light absorption capability, makes them suitable to be applied as excellent photosensitizers in the photocatylic reduction of CO2, the most alarming greenhouse gas on Earth. For example, in tandem with Re(I) mononuclear catalyst, CO2 was selectively converted into CO with a quantum yield approaching unity (82%). On the other hand, by using Ru(II) or Mn(I) mononuclear catalysts, HCOOH is formed, again with high quantum yields of 58 and 48%, respectively. Noteworthy, all measured efficiencies are the highest reported so far for photocatalytic CO2 reduction. The further development of this efficient and durable system has the potential to solve several economic and environmental problems, such as global warming as well as energy and carbon-source shortage by the alternative utilization of solar energy.