Lymphatic drainage of the heart

Someone once said that each man is his own island. I would make the analogy that our body is a country, where each organ is a city, each cell a building or factory in the city, and the proteins of your cells are the workers of the factory that make it run. The genes are the blue print of how to make different types of workers/proteins active in and outside of each cell. And finally between the buildings and the cities run the all-important roads that we call blood vessels. A second vascular network also irrigates most of our organs in the form of lymphatics assuring the role of a sewerage system, constantly evacuating excess fluids and waste products, but also serving as the return route for immune cells that like police and fire brigades patrol our cities in the search for danger signals.

It has been known for more than 300 years that the heart is endowed with an extensive lymphatic network, which runs in parallel to the blood vasculature. Whereas therapies targeting the blood circulation after myocardial injury, such as myocardial infarction (MI), has been the focus of an extensive body of research, notably with the advent of “angiogenic” therapy almost 30 years ago with the intent of building new blood vessels to replace damaged ones, the lymphatic circulation of the heart has received much less attention. Over the last 10-15 years our understanding of the parallel process of ‘lymphangiogenesis’, the mechanisms guiding lymphatic growth and repair, has improved significantly, with notably demonstrations of the essential role for lymphatic growth in normal healing or growth processes, but also in settings of chronic inflammation and tumor metastasis. 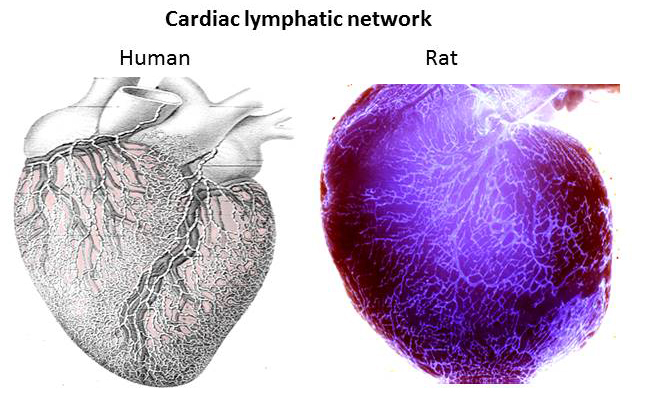 Schematic illustration of the superficial lymphatic network in a human heart (adapted from Sappey C., 1874) and in a rat heart. Lymphatic vessels in white, cardiac muscle in red. The heart is endowed with an extensive vascular network as shown in human hearts by Dr Sappey 140 years ago (BIU Santé, Paris) and by us and other investigating animal hearts.

In the current study, we thus set out to determine whether lymphangiogenesis plays a role after MI. Using rat models of MI, we found that indeed the lymphatic network of the heart undergoes significant remodeling after MI, extending from the scar, or infarct, region into neighboring “healthy” parts of the heart. It is indeed in this infarct border zone that most of the deleterious remodeling or changes occur in the chronic stage after MI, including increased size but reduced strength of the cardiomyocyte muscle cells of the heart, which eventually lead to development of what we call heart failure (HF), defined as incapacity of the heart to ensure a sufficient outflow of blood for the needs of the different organs in the body. This cardiac dysfunction that develops after MI is associated with chronic cardiac edema and inflammation, and as we could show, reduced cardiac lymphatic transport. Using the same analogy as above, it thus became evident that a defect in this sewer system of the heart contributes to the buildup of fluids, toxic waste products but also immune cells after MI that then causes further damage to the heart such as development of fibrosis, or stiffening of the cardiac wall.

We thus decided to test the hypothesis that boosting lymphatic repair, by a treatment that selectively stimulates lymphangiogenesis, may prevent the deleterious cardiac remodeling after MI by limiting cardiac edema and inflammation. Using our biopolymers for targeted intramyocardial delivery of a lymphangiogenic growth factor, VEGF-C, we found that we could improve the lymphatic drainage in the heart. Further, this resulted in reduced edema, inflammation, and fibrosis, and importantly improved cardiac function. Our data thus suggest that therapeutic lymphangiogenesis, alongside with therapeutic angiogenesis, constitute a new potential treatment for patients after MI and at risk for development of HF. Further studies are, however, needed to confirm our findings in human patients, and to determine the best approach for restoring lymphatic transport capacity in human hearts.