The spectral resolution of NMR experiments is heavily reliant on the spectrometer’s magnetic field strength and especially its homogeneity. While superconducting magnets can produce strong and highly homogeneous magnetic fields, they are expensive to maintain due to the cryogenic coolants required to keep the superconducting characteristics of the electrical conductor. In this regard it is desirable to produce the magnetic fields using permanent magnets which require minimal maintenance. However, achieving the required homogeneity is not straightforward. The dipolar cylindrical Halbach structure, for example, can produce a very homogeneous magnetic field but at the cost of using several permanent magnets with different magnetization orientations. However, this increases the difficulty in assembling the structure, since the pieces must be precisely oriented and assembled to achieve the required homogeneity. 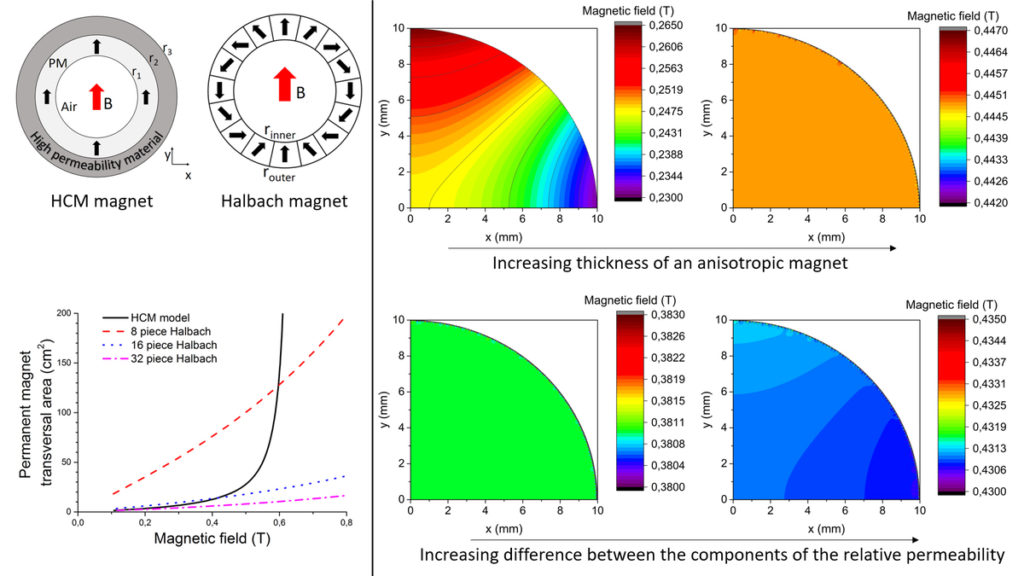 The hollow cylindrical unioriented permanent magnet, HCM, possesses a much simpler mechanical structure, consisting of (ideally) only two pieces: one tubular permanent magnet magnetized perpendicularly to its longitudinal axis and an external high magnetic permeability layer, such as carbon steel. If an isotropic magnetic material is used (where the magnetic permeability is equal in all directions) with a height greater much greater than its diameter, then the magnetic field homogeneity of the HCM structure will be very high. However, in general, the permanent magnetic materials are anisotropic.  If the relative magnetic permeability of the magnet is described in terms of its horizontal and vertical components, then the magnetic homogeneity will be worsened the more different both components are. However, increasing the thickness of the magnet improves the homogeneity of the magnet. The homogeneity of its more conventional counterpart, the Halbach structure, is highly dependent on the number of pieces that it consists of as well as the thickness of the structure.

An electromagnetic version of the HCM structure has also been proposed, which produces a highly homogeneous magnetic field and with a strength that is proportional to the intensity of the current flowing through the wires. This configuration would be ideal for use in high-field NMR spectrometers, since it allows the detection coil to be a solenoid, which is much easier to build than other structures and has a higher signal-to-noise ratio as well. An external high permeability layer can also be used in this configuration to increase the strength of the magnetic field strength.