Even though almost all smokers want to quit smoking and have made attempts to do so, the majority eventually relapses and continues to smoke. In the United States, in contrast to the overall significant progress in reducing tobacco smoking since 1960’s, the use of mentholated cigarettes has become more popular and account for about one-third of tobacco market. Menthol cigarette smokers relative to nonmenthol users usually show lower success of smoking cessation and higher rates of relapse although some conflicting observations appear in clinical and community studies. 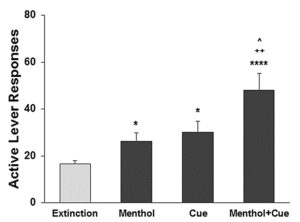 Since menthol in tobacco products even at a very low amount may readily acquire the properties of interoceptive cues for smoking and nicotine intake, it may become an occasion-setter that is predictive of the presence of nicotine reinforcement and thereby sustains smoking. Our recent study used a rat model of nicotine-seeking behavior to test this hypothesis. Specifically, rats were first trained in daily 1-h sessions to establish stable lever-press responding for intravenous nicotine self-administration under a fixed-ratio 5 schedule of reinforcement. Each nicotine delivery was signaled with a presentation of visual/auditory cues. Prior to these sessions, rats received an administration of menthol so that the self-administration of nicotine happened in a menthol-produced internal state. Then, the perseverance and reinstatement of nicotine-seeking behavior were examined without nicotine availability. The interaction between menthol as an occasion setter and discrete nicotine-conditioned cues was also tested.

Results showed that continued pre-session menthol administration or in-session conditioned cue presentation sustained the lever-press responses on the previously nicotine-reinforced (active) lever, indicating that these two factors individually leads to the perseverance of nicotine-seeking behavior. Moreover, combination of continued menthol administration and conditioned cue presentation resulted in a much higher level of lever responses relative to either alone, indicating that menthol interacted with cues to produce a more robust behavioral motivational effect. These data indicate that continued exposure to menthol or nicotine-conditioned cues, and particularly their combination significantly sustained nicotine-seeking behavior.

A separate set of rats, after establishment of nicotine self-administration with pre-session menthol administration, were subjected to extinction training where nicotine availability, pre-session menthol administration and in-session cue presentation were withheld. The relapse tests were performed after responses were extinguished. In the test sessions, re-administration of menthol or re-presentation of nicotine cues effectively reinstated lever-press responses on the active lever, indicating relapse of nicotine-seeking behavior. More significantly, the magnitude of reinstatement of lever responses by the combination of menthol and cues was larger than that induced by either alone, indicating a much stronger relapse-triggering effect.

It could be postulated that menthol, even though at a very low level incapable of directly enhancing nicotine reinforcement, can acquire occasion-setting properties and thus set an occasion for nicotine self-administration. The menthol-produced interoceptive state (an occasion setter) signaled the availability of nicotine reward and brought the rats into contact with the lever. The response-contingent presentation of nicotine cues then served as conditioned reinforcer to support responding on the lever. Therefore, in the extinction tests, the continued presence of menthol sustained nicotine-seeking responses relative to the menthol omission counterparts; and in the relapse tests, menthol re-administration effectively reinstated nicotine-seeking responses. In particular, such an interoceptive cueing effect of menthol interacts with nicotine-conditioned environmental cues to produce a more robust motivational effect.

These findings may have clinical implications. Abstinent smokers who used mentholated tobacco products may experience stronger craving for tobacco when they ingest menthol-containing products, such as chewing gum or drinking minty drinks. Thus, refraining from exposure to all menthol-containing products during smoking cessation might protect individuals from strong tobacco craving. And in particular important, these abstinent smokers should also avoid exposure to environmental stimuli previously associated with smoking.