Physical activity has a recognised role in the prevention of non-communicable diseases, cancer included. To maintain a satisfying health level, the World Health Organization (WHO) has assumed that everyone have to practice at least 150 minutes of moderate-intensity aerobic physical activity and 2 days of muscle-strengthening exercise during the week. The regular practice of physical activity is able to modulate several short and long-term physiological processes, which involved musculoskeletal, nervous, immune and endocrine systems. Nowadays, it is well known that a regular exercise exerts a great influence on several parameters, but it’s not to the knowledge of everyone that physical activity is able to interact with biological pathways, both at genomic and post-genomic levels. Exercise is an important stimulator that promote positive adaptations in skeletal muscle. These adaptations are controlled by changes in gene transcription and protein translation, with many of these molecules identified as potential therapeutic targets to pharmacologically improve muscle quality in patient groups too ill to exercise. 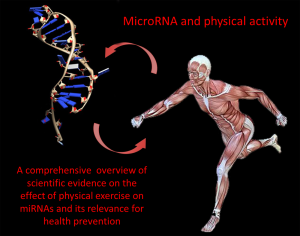 Micro-RNAs (miRNAs) are short molecules of RNA that encoded by DNA with a very important biological role: they are responsible for the control of the expression of genes potentially not useful for cell life. Thus, miRNAs have regulatory functions in several cellular processes such as programmed cell death, cell-to-cell communication, differentiation and cellular growth. The function of miRNAs appears to be in gene regulation. However, altered expression of miRNAs, causing DNA repair deficiencies, are frequently associated with cancers and may be an important causal factor for these diseases.
There is a great attention in studying the relationship between physical exercise and miRNAs, as physical activity is able to modulate miRNAs expression. Being physically active in everyday-life brings to several health benefits and the main biological positive modifications arise from genetic processes. A regular fitness routine is able to modify DNA transcription, modulating miRNAs expression. These small molecules are able to influence the body’s alterations between health and disease and practice physical exercise with perseverance is essential to shift this tendency to positive modifications. It is important to highlight that type, duration and intensity of the performed exercise protocol influences the modulation of miRNAs. A typical workout for aerobic training exerts different molecular responses from a weight-lift session, and the same workout protocol administered with different duration mode can modulate miRNAs differently, as well. Even if it is a nascent field, the use of miRNAs as biomarkers seems promising. A biomarker is a measurable indicator of a particular physiological or disease state, and so it is an helpful mean of research and, potentially, clinical treatment. The existence of circulating miRNAs (c-miRNAs), namely the miRNAs that circulate in the blood stream, makes the analysis procedure of these molecular parameters particularly simple and, above all, the sample acquisition results relatively low invasive for the interested party. The identification of circulating miRNAs and their regulation following exercise and in disease suggests that they may be useful biomarkers of health and adaptation to
treatment interventions. These observations also imply that miRNAs might be amenable to therapeutic intervention.
If physical activity can modulate miRNAs linked to disease promotion and progression, it has a preventive role at the molecular level, already. Appears important to comprehend exactly the mechanisms involved in this regulation in order to fully understand the therapeutic potential of miRNAs.
The theoretical basis through which physical exercise is able to modulate and influence the molecular aspects of health prevention are a wide and interesting field of scientific research world, still looking for new answers. This research sector is relatively new and a systematic study method is necessary to clarify and deeper inspect the following topic.