In an ever-changing world, a system must adapt to its surroundings. This is especially true for applications like aircraft protection, where a laser must actively engage a missile moving at great speed. Another example is in mobile optical communication, where the source and/or receiver are constantly moving. In both cases, the laser source must have an agile beam, which involves changing the beam angle dynamically. 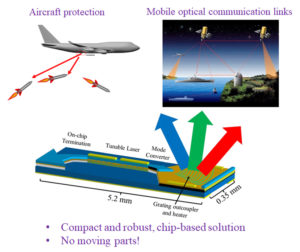 Beam steering is commonly achieved with macroscopic optical components such as movable mirrors on a mechanical stage. Because of their size and weight, which are both often much larger than the laser source, they represent significant overhead in optical systems, affecting size, cost, robustness, and speed. All-electronic beam steering, on the other hand, has the goal of realizing an extremely compact system with minimal external optics. To help catalyze development of this technology, DARPA recently funded a program specific to steerable near-infrared sources, and the Navy has recently begun a multi-spectral steerable source program that builds on that foundation.

A compact approach to developing all-electronic beam steering is based on photonic integrated circuits (PICs).  Similar to the electronic integrated circuit (e.g. computer CPU), a PIC embodies the integration of both active and passive components onto the same chip to realize complex and versatile functionality. Northwestern University researchers have demonstrated, for the first time, a mid-infrared PIC platform which has both an adjustable output wavelength and a widely steerable output beam. Both the laser source and steering element are present on the same chip. This platform can potentially eliminate the overhead of mechanical steering while providing a straightforward route to mass manufacturing.

This significant accomplishment was achieved in the Center for Quantum Devices, which is directed by Manijeh Razeghi, Walter P. Murphy Professor of Electrical Engineering and Computer Science in Northwestern’s McCormick School of Engineering. The laser source is based on tunable quantum cascade laser (QCL) technology first developed in her lab. The electrically tunable QCL was first developed as a fundamental component that has completely eliminated the need for moving parts in broadband mid-infrared spectroscopy. It is now being developed to target other applications of mid-infrared lasers, like aircraft protection and free-space communication, which can also benefit from this compact and agile light source.

For the beam steering demonstration, the tunable laser was integrated with an optical mode converter and a grating outcoupler, which transforms in-plane light propagation into a narrow, surface-emitting beam. As the laser wavelength is tuned, the emission angle is varied. Fine tuning of the emission angle (at constant wavelength) can also be achieved through use of an integrated grating heater. Not only does the surface emission make the technology more attractive for wafer-scale mass production, but it also significantly reduces the natural beam divergence of the laser (by up to 90 times along the grating direction).

At present, the beam steering range (~18 degrees) is the widest demonstrated for this type of self-contained architecture at any wavelength. This is only a starting point as well, with 2-4 times wider tuning (and steering) foreseeable in the near future. Expansion to 2-D beam steering is also under investigation by converting single grating output into a phased array. A more thorough description of this new technology is described in a paper published in Scientific Reports (Sci. Rep. 7, 8472 (2017)). This work was partially supported by the National Science Foundation (NSF) and Naval Air Systems Command.