The anterior cruciate ligament (ACL) is an important ligament in the knee joint. An injury to the ACL typically occurs during dynamic sports activities involving rapid changes of movement direction or landing from jumps, such as basketball, soccer or handball. Only approximately half of the individuals return to sport after ACL injury, while up to 30% sustain an ACL re-injury, despite rehabilitation. Interestingly, the non-injured knee is at greater risk of injury than the involved knee after initial injury. Taken together, this injury can cause a significant burden for the individual as well as for the whole society both on the short and long term. 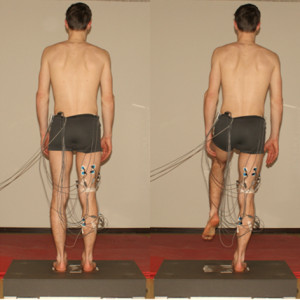 Next to the ligamentous structures, including the ACL, our muscles are also important to maintain stability during daily and athletic activities. Previous studies mainly evaluated the function of muscles crossing the injured knee joint after an ACL injury. The muscles around the hip and ankle were less studied, despite the increasing evidence that several muscles of our body need to work together to successfully complete daily and athletic activities. Hereby it is not only important for muscles to produce sufficient forces, but also to activate quick enough to recover from injury. To improve the clinical outcomes after ACL injury, it is essential to enhance our understanding on this timing of muscle activation after ACL injury.

Our study was the first to evaluate the timing of muscle activation of several knee, hip and ankle muscles in 15 ACL injured individuals and 15 non-injured control individuals when transitioning to single-leg stance. We compared the timing of muscle activation between both groups. Additionally, we also compared the injured leg with the non-injured leg of the ACL injured individuals.

The most important finding of this study was that muscles were activated later in the ACL injured individuals, not only around the injured knee joint, but also around the hip and ankle. This delayed muscle activation may impair the ability to effectively stabilize the lower limb. Furthermore, no consistent differences were found between the injured and non-injured leg of the ACL injured group.