Music as a medicine for sudden hearing loss

Sudden sensorineural hearing loss (SSHL) is a disease that suddenly affects hearing in one ear without any special trigger and is often accompanied by tinnitus (a ringing in the ear), ear fullness, vertigo, dizziness. The rate of SSHL is between 5 and 30 cases per 100, 000 people per year in developed countries, but this number may be largely underestimated. Although scientists have studied SSHL in detail, its causes are still unknown. Corticosteroids are routinely used to treat SSHL in many countries; however, it is unclear whether this standard treatment is effective in spite of its severe and potentially dangerous side effects. A large number of pharmaceutical treatment approaches have been tested, but they have not been satisfactory. 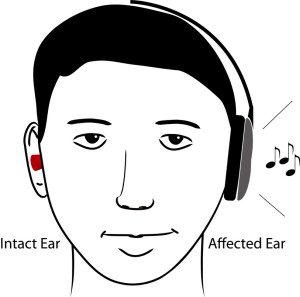 Fig. 1. Schematic illustration of constraint-induced sound therapy. The intact ear is plugged and music is only presented to the affected ear. (This Figure has been adapted from (Okamoto et al. 2014): Drawing courtesy of Lothar Lagemann.).

Recent human brain imaging studies showed that unilateral hearing loss (hearing loss in one ear) reduced auditory cortical activity in the affected ear, but increased it in the intact ear. This phenomenon is often described as the “use it or lose it” principle in the field of neuroscience. Similar to muscles, brain activity increases with repeated use and decreases when not used. We assume that SSHL is related to maladaptive brain re-wiring, which accelerates neural wiring between the auditory cortex and intact ear and at the same time weakens the wiring between the auditory cortex and affected ear. Due to these changes in brain activity, SSHL patients use the intact ear more and the affected ear less. This further promotes the “use it or lose it” phenomenon in the human auditory pathway.

In order to break this vicious cycle, we developed a behavioural treatment strategy for SSHL called “constraint-induced sound therapy”. This sound therapy takes advantage of the “use it or lose it” principle. In the present study, we plugged the intact ear of SSHL patients for the entire period of their hospitalization (1 – 2 weeks). Since patients could not hear well in the plugged ear, they paid attention to and used their affected ear instead of their healthy ear in their daily lives. This process strengthens neural re-wiring between the affected ear and brain. We also encouraged patients to actively listen to music for six hours per day with their affected ear during their hospitalization (see Figure). Patients were instructed to adjust the sound of the music to a comfortable level and perform equalizer settings by themselves in such a way that the music sounded as similar as possible to the sound before SSHL occurred. These adjustments led to an increase in sound power in the range of the affected frequencies.

Although more randomized clinical trials are necessary, our results are important because they demonstrate the power of a neuro-rehabilitation approach for sensory disorders. Many people are convinced that rehabilitation is exhausting and boring, but sound therapy using music can lighten the load and encourage patients to continue listening. This neuro-rehabilitation approach may contribute to improving the quality of life of not only those with SSHL, but also people with many other diseases.