Photosensitizers are molecules that are able to produce cytotoxic species that include singlet oxygen, a particular form of oxygen that is strongly oxidizing, when they are illuminated by visible or NIR light. Because of this property, they are largely used in therapeutic applications including photodynamic therapy. However, visible or NIR light only penetrates a few millimeters through tissue; this therapy is therefore limited to skin and tissue accessible to endoscopes and fibers. On the contrary, X-rays or γ-rays penetrate tissue deeply and, since they destroy DNA, they are currently used as a cancer treatment known as radiotherapy.

A scintillator is a material able to emit light when irradiated with X-rays or γ-rays. A tiny piece of such a material called a nanoscintillator can be combined with a photosensitizer. If they accumulate in a tumor, the nanoscintillators can act as an internal light source under X- or γ-ray irradiation, thus activating the photosensitizers. This effect can potentially improve the treatment efficiency by a synergistic combination of radiotherapy and photodynamic therapy. 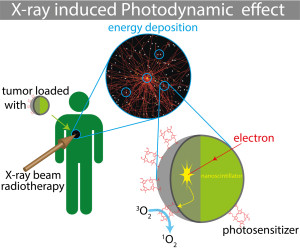 The steps involved from x-ray irradiation of the tumor to the production of singlet oxygen.

Nevertheless, this brief description is rather crude and more complex steps are involved. The entire process can be summarized in three steps: First, a primary interaction has to occur in the vicinity of the particle i.e. in the tumor. The energy is then spread in the surrounding matter and has to be deposited in the nanoscintillators, which is then considered as excited. Finally, these excitations have to be transferred to the photosensitizer to generate singlet oxygen that induces cytotoxicity. This last stage involves several kinds of energy transfers such as Förster Resonant Energy Transfer (FRET) and Radiative transfer. Evaluating the real efficiency of the entire process is not straightforward and each of these steps has to be considered.

The efficiency of the first step can be easily estimated. The probability of the primary interaction only depends on the average density of the tumor when loaded with nanoscintillators. Evaluating the efficiency of the second step is more challenging. To the best of our knowledge, prior to this work, no accurate estimation of the efficiency of the relaxation process has ever been provided and this was the main purpose of our paper. The previous models that were proposed involved an effective medium, i.e. an imaginary medium composed of water and of the matter of the nanoscintillators uniformly spread within the tumor without considering the natural inhomogeneity of the system. In our model, we consider the tumor as a sphere of water loaded with scintillating nanoparticles, for which the size and concentration can be tuned. Nonetheless, the primary interaction between X-rays or γ-rays and the tumor generates highly energetic secondary particles, mainly electrons, and the real energy deposition is spread among the nanoscintillators and the water.

In our simulations, we are able to track the electron energy losses in matter and show that the energy is deposited almost everywhere along the path (up to a few mm). It also highlights that a significant fraction of the energy is deposited in water. As a consequence, the models that considered an effective medium over-estimated the amount of energy likely to be transferred to the photosensitizers. On the other hand, the excess of energy deposited in water still may have a therapeutic effect by directly deteriorating the DNA through the well-known radiosensitization effect. The Monte Carlo based simulations we developed enable a better estimation of the maximum efficiency mainly by providing a more accurate quantification of the energy truly deposited in the nanoscintillators. Using this model, we have shown that the spatial energy distribution between the nanoscintillators and the surrounding media resulting from the energy relaxation cascade of an interacting X-ray or γ-ray leads to a significant loss regarding the light emission efficiency and thus the photodynamic effect. On the other hand, we highlighted that a significant fraction of energy is deposited within the nanoscintillators despite the primary interaction occurring in the surrounding media. Considering all these effects, we introduced a new loss parameter (ηnano) which has to be considered to quantifies the fraction of energy actually deposited in the nanoscintillator, and we provided a numerical estimation of this parameter using Monte Carlo simulations for various nanoscintillator types in terms of composition, size and concentration. The typical values of this ηnano parameter are in the range of a few percent for the investigated particle concentrations. This knowledge can thus be used to quantify the expected number of singlet oxygen molecules generated in the context of a therapy combining radiotherapy and a photodynamic effect.