There have been a lot of news reports regarding the neonicotinoid insecticides, (NIs) their use and the effects that these may have on the European Honey Bee, (Apis Melifera). The prairies of Canada is one of the regions of greatest agricultural production in the world approximately 60% of all pesticides used in Canada are used in the Prairie lands (Saskatchewan, Manitoba and Alberta) and Saskatchewan has 38.5% of the Canadian farmland divided into 44 thousand farms. Around 25% of Canadian honey comes from Saskatchewan. Any threat to bees will impact food security as many crops like canola, apples, potatoes and onions need insect pollinators. 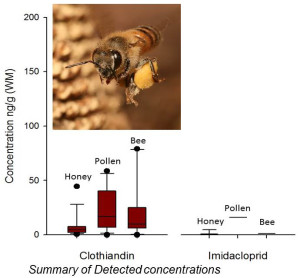 Fig. 1. Average concentrations of 2 NIs in honey, bees and pollen in Central Saskatchewan.

This study looked a 3 hives from 7 locations within a 15km radius near to the city of Saskatoon in Canada. The aim was to sample worker bees, honey and pollen for NIs and also the breakdown products of one of the most frequently used NI (Imidaclorprid). We also looked at toxicity data on the honey bee from around the world and found a range of LD50 values for each NI. The LD50 value is calculated as the concentration in which 50% of a species would be killed and for all animals this is not a fixed value as it depends on genes, how the chemical is fed to the animal and many other factors. Furthermore we then looked at how much honey and pollen a single bee would consume over winter and assuming that no chemical is lost and calculated if the individual NI concentrations in honey and pollen would be great enough to breech the LD50 values. What we found was that in the bee itself at the time of sampling only 1 compound clothiandin exceeded the lowest reported LD50 in any bee sample (mean of 2.5ng bee-1) and detection was in ~50% of the bees samples. This was far lower than the mean LD50 .for the honey bee of 18 ng bee-1, but the frequency of detection (how many samples had this chemical), was higher than in other studies where <10% of samples tested positive for this NI. The reason for higher detection may simply be that we sampled in an area where this chemical was used lots and as we looked in a small area.

The over winter exposure of bees assuming a worst case scenario and that the bee would live for 6 months implied that clothianidin and thiamethoxam may reach concentrations where the LD50 values would be exceeded through diet. However as stated this is a worst case scenario and makes a lot of assumptions in terms of dietary uptake and accumulation and actual detection frequency of the compounds was approximately 50% of samples for clothianidin and as low as 20% in pollen for thiamethoxam.

This is a test study for NIs in honey, pollen and bees and though positive results were identified and a potential threat to bee health identified the number of samples and range was limited and more work will be needed looking at more chemicals, the breakdown products of more NIs and other factors to explain the impact of contaminants on bee health.