Neurofeedback for ADHD – specific effects on behaviour and brain

Children with ADHD (Attention Deficit/Hyperactivity Disorder) are commonly described as having difficulties in controlling their attention and in regulating and especially withholding actions when they are inadequate. One common way of addressing these problems is medication. While it may be very helpful in many cases, medication for ADHD can have side effects and does not convey a sense of self-agency concerning the symptoms to the patients. 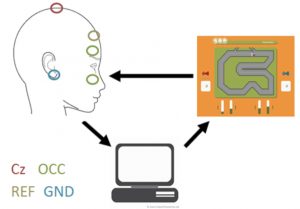 Fig. 1. Brain activity is measured at using an electrode at position Cz (top/middle of the head) and is processed so it can be made visible to the patient on a computer screen (software “Sam”, University of Erlangen). To control for artefacts, activity is also measured via electrodes above and below the eye. In addition, reference (REF) and ground electrodes (GND) are also used.

Thus, in recent years, the popularity of neurofeedback as another treatment approach for ADHD has grown immensely. During neurofeedback, a patient’s brain activity (i.e. the “neuro”-part of neurofeedback) is recorded using small electrodes placed at particular positions on the head. The recorded signal is then immediately presented to the patient through a simple computer interface (i.e. the “feedback”-part of neurofeedback) (Fig. 1). Through this interface, the patients are able to move a comic figurine or a car by regulating their own brain activity in a particular manner. In the case of ADHD, the figurine on the screen moves when concentration is increased and the patient reaches a state of calm, sustained attention. Thus, the patient is immediately and directly rewarded for successful attentional control, which is one of the core difficulties for patients with ADHD.  Many previous studies have shown very beneficial effects of neurofeedback for ADHD symptoms and patient behaviour, but it was still unclear what changes neurofeedback actually induces in the underlying brain activity.

Precisely this question was addressed in the current study. Children’s brain activity was measured before and after they took part in 16 sessions of neurofeedback over a period of 8 weeks. Specifically, brain activity was recorded while children performed a task asking them to pay attention to words on a screen and to perform or inhibit a button press according to what they were seeing. Compared to a group of children who did not undergo a new treatment for ADHD, the patients in the neurofeedback group not only had less pronounced ADHD-symptoms as rated by their parents after the 8 weeks, but also got significantly better in controlling their actions in this task. Most importantly, these improvements were also reflected on the brain level. Here, specifically the P3, a component of brain activity closely connected to action selection and inhibition, was significantly increased after neurofeedback only (Fig. 2).

Fig. 2. A) Brain activity at position Cz for the patients with ADHD receiving neurofeedback (orange tones) and those included in the control group (blue tones). Lighter colours reflect activity before the 8 weeks. B) Same activity as in A), but shown in topographic maps.

This aspect of brain activity is typically reduced in children with ADHD compared to those without. Therefore, our data shows, for the first time, that neurofeedback does indeed modulate brain activity which, importantly, is highly relevant for core symptoms of ADHD. We could therefore demonstrate that receiving immediate feedback about their behaviour and brain activity as well as experiencing some self-agency concerning these factors through neurofeedback not only helped patients with ADHD to reduce typical behaviours, but also had substantial effects on the actual underlying brain activity. It now needs to be examined whether the observed effects are still present six months after the treatment and how they compare to the effects which ADHD medication has on patients’ brain activity.