In recent decades, the number of people suffering from chronic diseases has increased dramatically. Referring to the report of British Heart Foundation (BHF), almost 2.6 million people in the UK are living with heart and circulatory disease. In today’s growing and ageing population, cardiovascular disease, stroke and diabetes are the main causes of disability and death. This brings an increasing demand for personal healthcare solutions to provide continuous monitoring, cost-effective observation and early detection of physiological parameters to avert or at least to reduce the incidence of these diseases and prevent patient’s status from deteriorating.

More comprehensible approaches have emerged based on the use of photoplethysmography (PPG), a non-invasive optical technique that is used to measure dynamic changes in tissue optical properties, such as blood volume change in a micro-vascular bed of tissue. The drawback with conventional PPG sensor e.g. pulse oximetry, is that the sensor is susceptible to body movement and physical activity resulting in inaccurate or faulty readings. Carelight’s novel optical layout underlying solid opto-physiological interaction research, overcomes limitations of present PPG sensors to continuously provide clear and unfailing signals, even in high intensity physical activity with the speed over > 12 km/hr. The ultra-lightweight wearable Carelight sensor can be placed on various parts of body such as chest, back, forehead, palm, finger and ear lop as shown in figure 1, unlike the conventional PPG sensor that designed for particular place e.g., finger. In addition, Carelight sensor provides reliable, remote and continuous monitoring of a range of vital signs including Heart Rate (HR), Respiration Rate (RR), Heart Rate Variability (HRV), Blood Pressure (BP), Body Temperature (BT) and Oxygenation saturation levels (SpO2%). 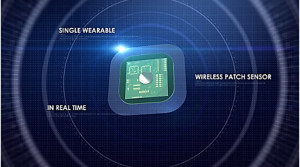 The Carelight sensor has extensively tested and assessed against available commercial devices such as Acti-Graph chest strap, Mio-Alpha smart wrist watch, gold standard ECG and TempIR. Carelight sensor has well performed and provided a reliable and accurate results in rest mode as well as in different physical movements activity such as cycling, walking, jogging and running. In addition, the carelight sensor has tried and performed accurately on different situations such as dark melanin pigment, obese participants and lotions/gels applied on the skin. An analogue three-axis MEMS accelerometer (3MA) was employed to detect acceleration and movement in all three axes and to provide a reliable movement reference. When the user’s body moves, the accelerometer produces signals proportional to the magnitude of the movement, and the resultant total acceleration vector R represents the instantaneous direction and magnitude of motion in 3D space. Thus, the acceleration reference used for motion reduction in the signal.