No-bonding reactivity of Helium under pressure

Noble gas (NG) elements have been thought historically to be chemically inert. Nevertheless, already in 1930, Pauling predicted that Xenon could react with other elements. Thirty years later, Bartlett synthetized the first Xe compound, Xe+[PtF6]–. High pressure is known to be an effective method to trigger the reaction between NGs and other elements. Both in experimental and theoretical studies, this technique has become widely used to analyze the reactivity of NG elements. Helium is the smallest NG and has a large electron ionization energy and a low electron affinity. This makes it impossible for He to form chemical bonds through the electron sharing or transfer. 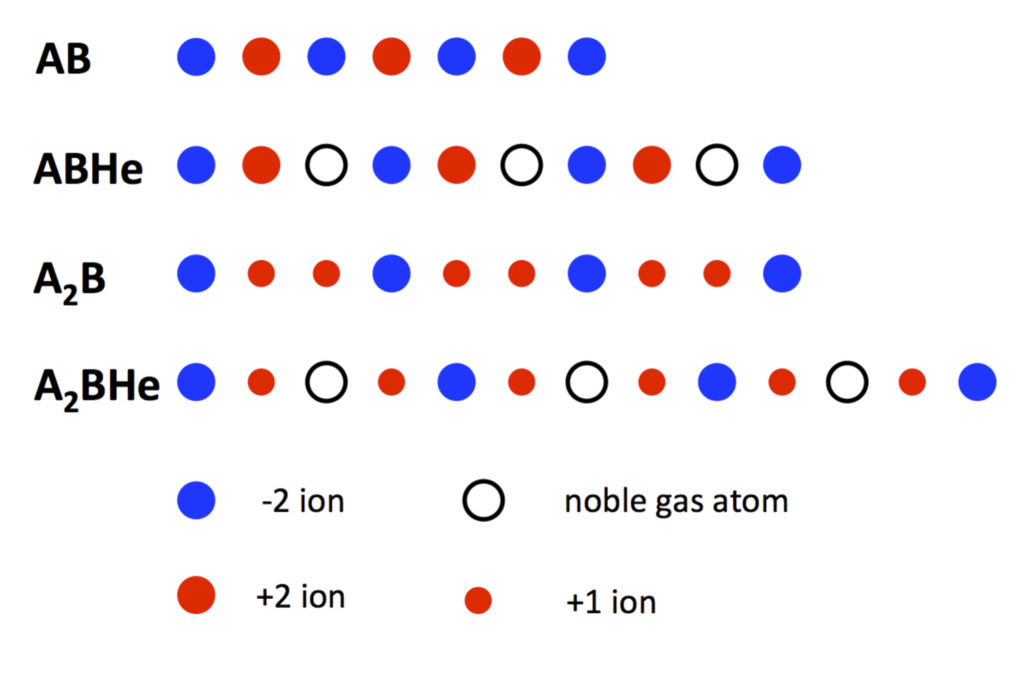 However, a recent study showed that Na and He can form compounds under pressure with a stoichiometry ratio of 2:1. Although Na atoms lose electrons in the reaction, these electrons are transferred to the interstitial sites of the lattice, rather than to the He. We therefore noticed that the direct chemical bonding cannot be used explain the formation of this compound. Na2He is actually an electride, whose chemical formula is better represented as Na2+E2-He (E2- stands for empty interstitial site containing 2 electrons). In other words, He forms a stable compound with the ionic compound Na2+E2-. In our study, we use a 1D model (Fig. 1) to explain what happens when He inserts into A2B type ionic compound, and compare it with the case of AB type ionic compounds. When He inserts into the AB-type chain, the average distance between A and B increases, and the Coulomb attraction decreases. As a result, the Madelung energy increases, which means the He insertion into AB chain makes the system less stable. In the case the stoichiometry ratio 2:1, the repeating unit is A-B-A for A2B-type compound (B-A-B for AB2 type compound). In this case, a short-range repulsion exists because of the contiguous, similarly charged ions at the interface of the units. The He atoms insert between the repeating units and increase the distance between the neighboring units, decreasing the electrostatic repulsion and the Madelung energy. With the aid of 1D model, we see He insertion into AB type compounds raises the energy while insertion into A2B or AB2 type compound will lower it. In our work, we calculated the reaction of He with MgF2, Li2O, CaF2, LiF, MgO as well as Na. The He insertion into compounds with stoichiometry ratio 2:1 is stable while the it is unstable for the case of 1:1. This strongly supports our model.

Our study may have significance in geoscience. Due to the light weight of He, it was supposed to have escaped to space rather than stay in the Earth’s atmosphere. Also, there were no known minerals containing He because of its inertness. Our work shows that He could have formed compounds with other elements under pressure thanks to the change of Madelung energy as its driving force. This indicates in the Earth’s mantle, there might be He stored within the minerals.