Multiple endocrine neoplasia type 1 (MEN1) is a genetic disorder characterized by usually benign tumors of the parathyroid glands, pancreatic islets, and anterior pituitary. The genetic etiology of MEN1 is localized to the MEN1 gene located on chromosome 11. The prevalence of MEN1 is approximately 2-20 per 100,000 individuals, and MEN1 is diagnosed using clinical or genetic criteria. 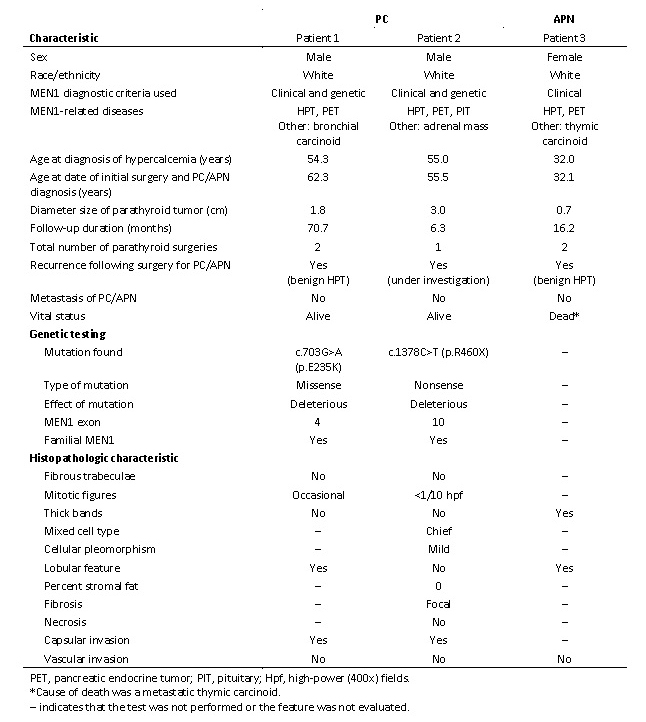 Tab. 1. Demographic, clinical, and genetic testing results for and histopathologic characteristics of MEN1 patients with PC or APN.

In a search of the MEN1 patient database of the Department of Surgical Endocrinology at MD Anderson Cancer Center between 2004-2015, all patients who underwent operations for HPT and had histopathologic diagnoses of PC or APN were identified. A total of 455 patients with diagnoses of MEN1 were identified. HPT was diagnosed in 338 patients. Two of the patients with HPT had PC, whereas the third had APN. All three patients had pancreatic endocrine tumors, one had a pituitary adenoma, and two had carcinoids. None of the patients had evidence of metastasis, and the two PC patients were alive at 70.7 and 6.3 months after PC diagnosis, respectively. The APN patient died of thymic carcinoid metastasis 16.2 months after APN diagnosis. The observed genetic mutations in the PC patients were located in exons 4 and 10, respectively. The APN patient never had confirmatory genetic testing. All three patients had recurrence of hypercalcemia, and two patients underwent reoperation, one with PC and the other one with APN at the initial surgical intervention. Pathologic analysis revealed a hyperplastic gland without tumor recurrence in these 2 patients. The other PC case is currently being closely monitored. Table 1 lists the clinical and genetic, characteristics of the three patients.

We made three major finding in this study. First, we have the genetic correlation between PC and MEN1 mutations and this is the first report of atypical neoplasm in MEN1 patients. Until now, the specific role of MEN1 mutations in the formation of malignant tumors in the parathyroid glands has been unknown. Authors previously reported that MEN1 mutations in such patients were etiologic factors for MEN1, but the present study is the first to demonstrate that these mutations are related to PC.

Second, most patients with MEN1 and HPT are recommended by consensus to undergo resection of 3.5 glands (subtotal) or 4 glands (total) with autografts. Because this genetic syndrome usually is not confirmed or is suspected only during the initial operation for HPT, MEN1 patients with HPT often undergo resection of only one parathyroid gland in the initial operation. For this reason, these patients often have recurrences and must undergo reoperation. The finding of a parathyroid tumor will now affect the current management of MEN1 in such patients because the present study introduced new causes of recurrent and/or persistent HPT and risk of metastasis.

Third, all three patients had recurrent hypercalcemia: two of them underwent open cervical exploration. The dilemma now is differentiation of a recurrence owing to carcinoma or benign glandular hyperplasia. Therefore, in cases with sufficient evidence to suspect a PC or APN, the surgeon must perform tumor resection with an open cervical exploration, avoiding a minimally invasive intervention as is usually done for benign glandular hyperplasia.

In summary, the occurrence of malignant PC in the setting of MEN1 is rare but should be considered. The presence of PC or APN introduces a management dilemma when hypercalcemia recurs and could limit the use of minimally invasive surgical techniques.