Alzheimer’s disease (AD) is a progressive dementia, affecting over 20 million people worldwide, mainly adult subjects in advanced age characterized by loss of neurons and the presence of amyloid plaques in the brain. Several families have been described worldwide providing evidence that a first degree relatives of AD patients have a higher lifetime risk of developing AD then the general population highlighting the role of genetic risk factors. 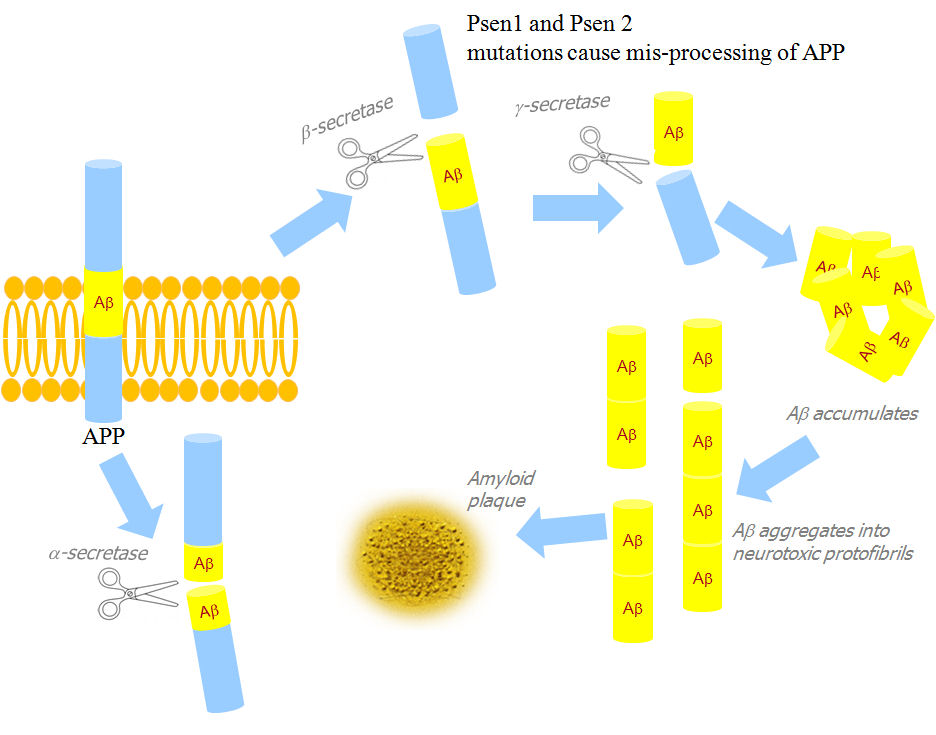 Fig 1. Schematic representation of processing of amyloid precursor protein (APP) and the role of mutations in the plaques formation. The cleavage of APP by beta-secretase and gamma-secretase to form the ABeta peptide activating the amyloidogenic pathway. ABeta may then aggregate to form amyloid plaques. Mutations on Presenilin 1 (PSEN1) and Presenilin 2 (PSEN2) genes alter the processing of APP increasing the total ABeta peptide production

Up to now (February 2016) the Alzheimer Disease & Frontotemporal Dementia Mutation Database (http://www.molgen.vib-ua.be) has listed a total of 279 different DNA mutations in 595 families around the world in three genes involved in the amyloid plaques formation: Presenilin 1, PSEN1, Presenilin 2, PSEN2 and amyloid-b precursor protein, APP. The three genes have been shown to cause 50% of all Familial AD. In particular, 49 pathogenic mutations for APP, 215 for PSEN1 and 15 for PSEN2 have been discovered. PSEN 1 and PSEN 2 are part of a complex called g-secretase involved in the APP processing which is the main responsible of the amyloid plaques formation (Fig 1). The first PSEN1and PSEN2 mutations were described 20 years ago.

We have identified a mutation (not yet described in the database) in a female patient who had the first disease symptoms at the age of 73 years old. Her symptoms rapidly progressed and the patient was admitted to a hospital two years after the onset. The patients presented positive family history for dementia, her mother and two sisters suffered from cognitive impairment.

The mutation is located in a region of the PSEN1 gene in which mutations have been already described being reported 10/215 different path genetic mutations (6.65%) in 16/475 families (3.36%) in the world. In order to verify the pathogenicity of the new mutation, we examined the absence of the mutation in control subjects and we performed a bioinformatic analysis. This genetic error is predicted to lead to a reduced function altering the structure of the protein and as such cause the disease.

The heritability of AD has long been recognized, however, at the beginning, the low incidence of cases with an identified genetic component in the overall demented population has lead clinicians to consider the genetic component to be of little practical relevance. Thus, the diagnosis of AD was a clinical diagnosis based on characteristic symptoms and signs. Recently, the diagnostic criteria have been updated putting in the diagnostic evaluation program a screening for known/unknown mutations in one of the three candidate genes.

The formation and clearance of Amyloid-b are important as this toxic peptide leads to neuronal damage and success in future therapeutic avenues will benefit from an understanding of how the main genetic risk factors are able to affect the molecular pathology to produce this progressive disease.