Nucleophosmin holds it all together, the smart glue of the nucleolus

The nucleolus is an organelle that serves as a factory for ribosome production and a stress sensor in the nucleus of eukaryotic cells. Unlike the nucleus, the nucleolus is not surrounded by a membrane. Instead, the nucleolus and several other so-called “membrane-less organelles” are something like the colorful undulating blobs in lava lamps — dynamically forming, shifting and fusing. In work published by the Kriwacki lab at St. Jude Children’s Research Hospital, we discovered that a protein critical to liquid-liquid phase separation within the cell undergoes internal changes in conformation that are key to its function.

The protein, nucleophosmin, is a kind of “smart glue” within the nucleolus that helps organize and regulate the construction of ribosomes — the biological machines that assemble proteins using their RNA genetic code as a guide. In earlier studies, we revealed how nucleophosmin binds to proteins and RNA to promote phase separation, as well as ribosomes’ assembly. However, our studies of nucleophosmin yielded results hinting that its heterotypic interactions — those with proteins other than itself and RNA — did not fully explain how part of the molecule, called the intrinsically disordered region, functioned. 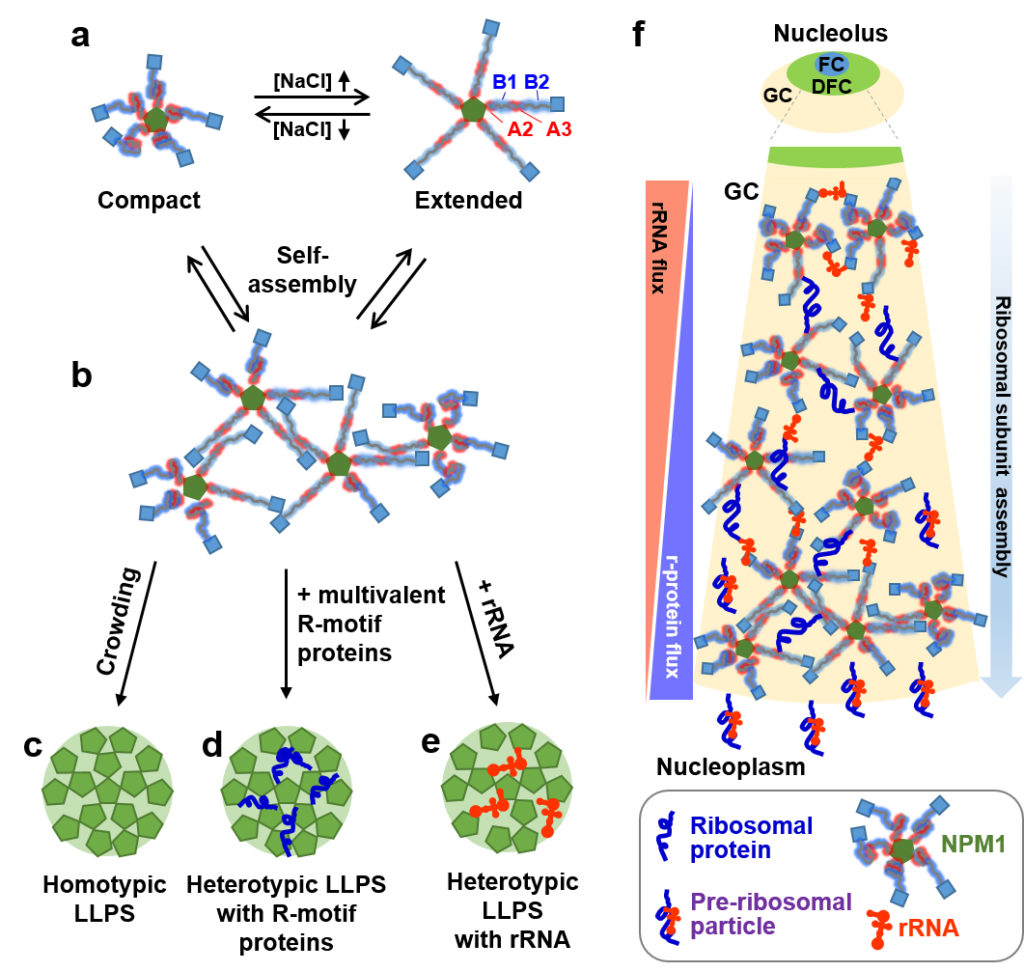 Fig. 1. Conformational changes in nucleophosmin regulate its “smart glue” function in the nucleolus. Nucleophosmin adopts a broad range of configurations to achieve biological multi-functionality (a), and can assemble into multimers (b) which form the scaffold for homotypic liquid-liquid phase separation (c). Homotypic interactions (c) can be replaced by heterotypic interactions with nucleolar proteins such as ribosomal proteins (curvy blue line) or non-ribosomal proteins (i.e., SURF6) (d) or with rRNA (orange objects) (e), changing the nature of the scaffold. (f) Schematic illustration of nucleophosmin-aided ribosome assembly in the nucleolus.

The experiments point to how the intrinsically disordered region undergoes changes as ribosomes are assembled and the makeup of the nucleolus changes. The changes in the intrinsically disordered region increase homotypic interactions — those within the nucleophosmin molecule itself. The research also revealed how nucleophosmin interacts with another protein called SURF6. Scientists discovered that SURF6 acts as a partner to nucleophosmin in creating and maintaining the loose scaffolding that holds the fluid nucleolus together.

The experiments revealed important new details of the mechanism by which the “smart glue” nucleophosmin changes its internal conformation as the liquid-like nucleolus facilitates ribosome assembly. At an early stage of the process, its primary job is to shepherd RNA and proteins to assemble ribosomes. But as the glue molecule hands off its cargo as ribosomes form, the glue molecule adjusts itself to interact with other glue molecules via homotypic interactions.

The discoveries of nucleophosmin’s role in the nucleolus will offer broader insights into the mechanism of phase separation in other membrane-less organelles in the cell. The research could also have important clinical implications, for example in understanding the molecular basis of amyotrophic lateral sclerosis (ALS), or Lou Gehrig’s disease. It’s a debilitating disease in which toxic dipeptide repeats affect nucleophosmin’s nucleolar function and inhibit ribosome assembly. Also, mutations in nucleophosmin are the most frequent molecular abnormalities in adult acute myeloid leukemia. In future studies, we plan to explore how the abnormal nucleophosmin drives the leukemia.