The epoxide ring opening of the trimethylsilyl substituted epoxy alcohol 1 (R1 = H) by CH3S(O)CH2Na (NaDMSO) produces anion 2 as the transient species, which undergoes an unusual reaction rather than the Peterson olefination (Fig. 1). When the reaction is combined with the kinetic resolution using the Sharpless asymmetric epoxidation, an optically active anti-epoxy alcohol 1 is converted to anti-diol (anti–3). Hydroxy group-protected anti derivatives 1 (R1 ≠ H) and syn-derivatives thereof are also good substrates for the ring opening to afford the corresponding diol derivatives. Thus, protection of the hydroxy group of an epoxy alcohol is synthetic equivalent to the differentiation of the hydroxy group in a vic-diol for further transformation. The asymmetric dihydroxylation of terminal dienes produces enantioenriched diols, but the differentiation of the two hydroxy groups would be difficult except for specific cases. 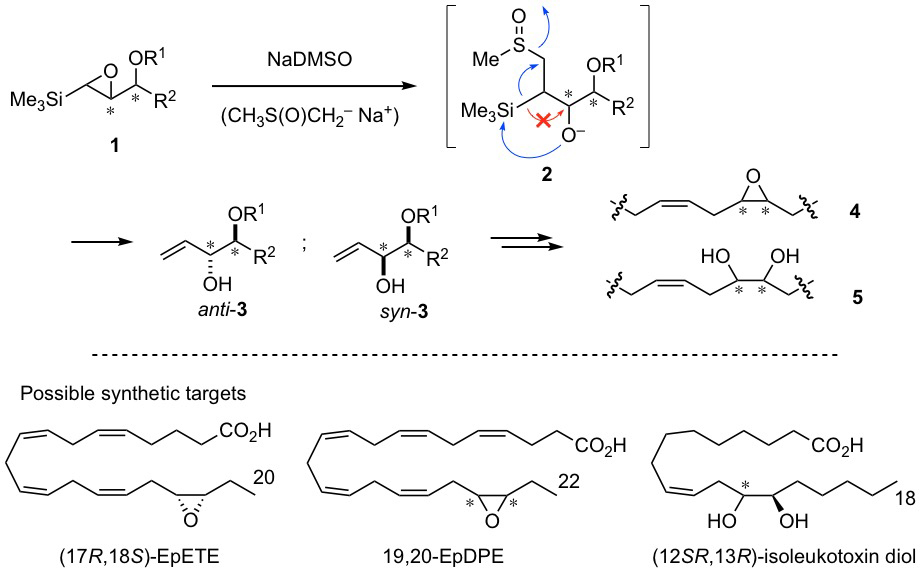 The oxidation of ω-3 fatty acids by cytochromes P450 (CYPs) has attracted much attention in association with health benefits, and some of the enzymes promote the epoxidation of the 17,18-double bond of eicosapentaenoic acid (EPA) regio- and enantioselectively to give 17,18-epoxy-EPA (17,18-EpETE) (Fig. 1). The (17R,18S)-isomer protects neonatal rat cardiomyocytes against Ca2+-overload more effectively than the (17S,18R)-enantiomer, and hence the enantiomer-dependency is suggested for other biological activities found for racemic 17,18-EpETE: i.e., anti-allergic, anti-inflammatory, and anti-arrhythmic effects, promotion of hyperpolarization and relaxation of human lung cells, and inhibition of endothelial cell proliferation.

In contrast to the biological interests, 17,18-EpETE is commercially available only in the racemic form, whereas the synthesis of (17R,18S)-EpETE via bromohydrination followed by lipase-catalyzed esterification suffers from low regioselectivity.

Because of the problem associated with the availability, the epoxide ring opening mentioned above was applied for the synthesis of (17R,18S)-EpETE as outlined in Figure 2. The α-ethoxyethyl ether (EE) 6 of the syn epoxy alcohol was prepared by the kinetic resolution followed by the Mitsunobu inversion, and converted to olefinic alcohol 7 by the epoxy ring opening reaction. The product 7 was protected as the triethylsilyl (TES) ether and the subsequent hydroboration afforded aldehyde 8. The Wittig reaction with the ylide derived from 9 followed by several steps gave mesylate 10. Exposure of 10 to slightly acidic conditions using p-TsOH·pyridine in MeOH generated alcohol 11, which was then treated with K2CO3 to effect the epoxide formation. Finally, hydrolysis with LiOH produced (17R,18S)-EpETE in ca. 15 mg. 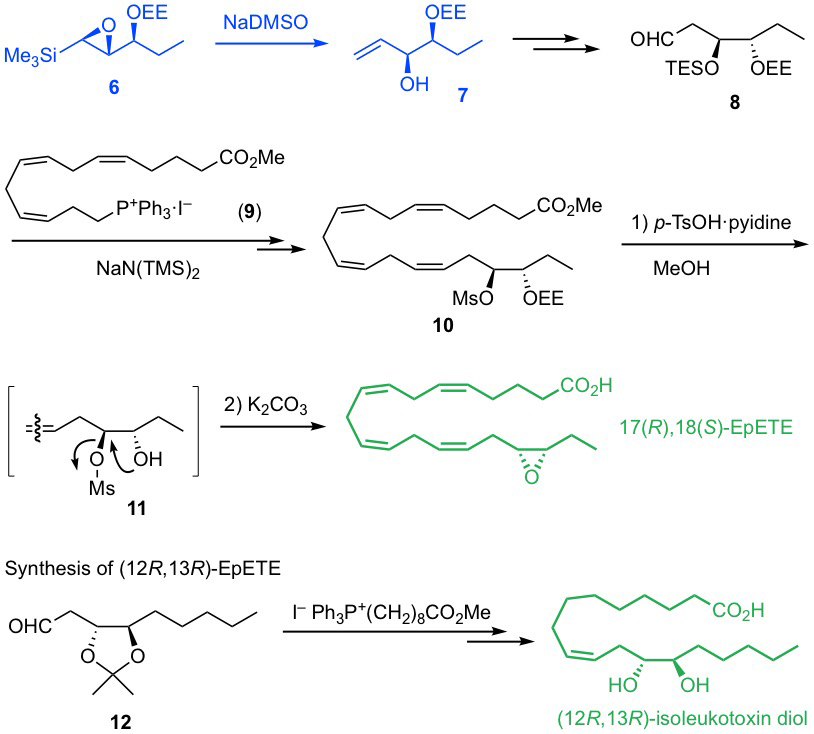